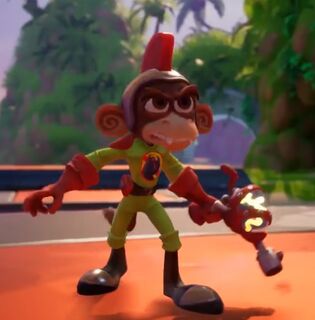 Agent 9 is a playable character in Spyro: Year of the Dragon. Once one of the Professor's lab monkeys, Agent 9 was given a special blaster and taught how to fight.

Powers and Abilities: Superhuman Physical Characteristics, Weapon Mastery, Energy Projection (via blaster), Explosion Manipulation (via bombs), Ambidextrous/multitasking (Can shoot with his left arm and throw bombs with his right)

Durability: At least City level (Can take hits from enemies that can harm Spyro)

Stamina: High (Fought through hordes of Rhynocs several times, even doing it twice in a row in Fireworks Factory)

Range: Hundreds of meters with blaster and bombs

Intelligence: At least Above Average (Able to use hi-tech weaponry like his blaster. Said to be a highly intelligent special operative)

Weaknesses: Agent 9 is extremely insane and trigger-happy (once got cursed for shooting a dog in the butt multiple times). He also seems rather reliant on weaponry, and unlike Spyro and Sheila, he cannot swim.

Retrieved from "https://vsbattles.fandom.com/wiki/Agent_9_(Spyro)?oldid=6198890"
Community content is available under CC-BY-SA unless otherwise noted.