VS Battles Wiki
Register
Don't have an account?
Sign In
Advertisement
in: Tier 8, Tier 8-A, Characters,
and 22 more 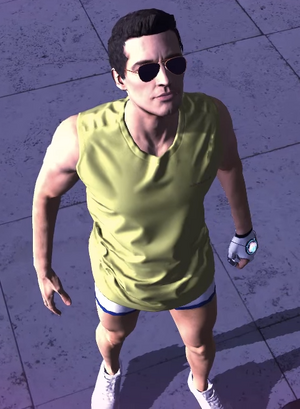 A man only referred to as Agent, he is the main protagonist of the game First Person Lover. He is on a mission to spread love and cleanse the people of negativity, to aid him in which he has access to multiple love weapons. These weapons work by stripping their target, after which the Agent can put new clothes on them and make them positive

Powers and Abilities: Superhuman Physical Characteristics, Shockwave Generation (with the Love Stun Push, which can stun enemies), Empathic Manipulation (Liberation involves materializing clothes on people to get rid of their hate and make them more positive), Limited Flight (Appears to be able to control his movement when falling), Technology Manipulation (Can disable Hate Harvesters), Energy Projection with Kiss Gun, Plant Manipulation with cannon (The cannon produces flowers in the location it is shot), Explosion Manipulation, Status Effect Inducement and possibly Forcefield Nullification with Teddy Grenades (The Teddy Grenades cause targets to be stunned and were able to disable the final boss's forcefield during the battle), Cloth Manipulation (Attacking someone with weapons eventually causes their clothes to disappear)

Attack Potency: Multi-City Block level (Able to repel those who can physically harm him)

Speed: Athletic Human (Can run up to make large jumps which would be impossible for any average human)

Durability: Multi-City Block level (Withstood causing and being inside a large explosion)