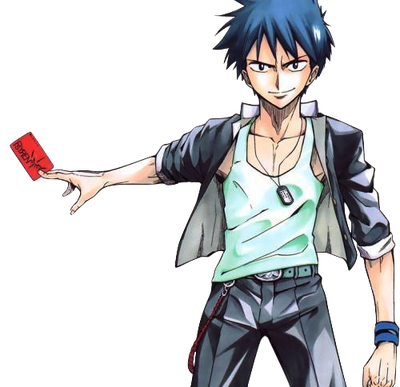 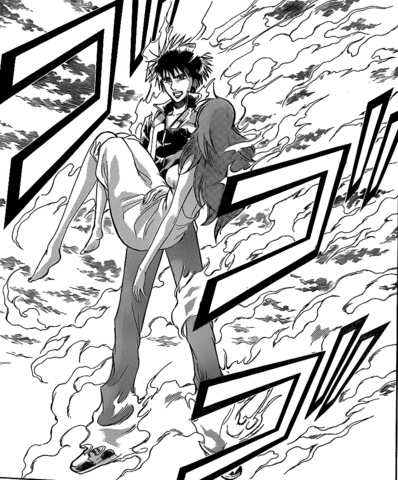 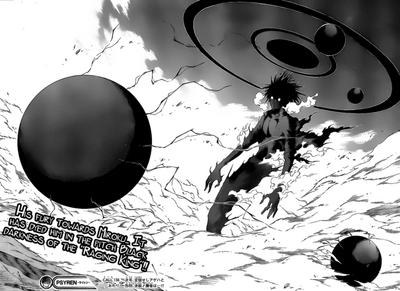 Ageha Yoshina (夜科 アゲハ Yoshina Ageha) is the main protagonist of Psyren. He is a high-schooler, who takes part in the game of Psyren. He first enters the game seeking the whereabouts of his classmate, Amamiya Sakurako.

Powers and Abilities: Statistics Amplification (via Rise which grants Superhuman Physical Characteristics), Skilled fighter (capable of taking on groups of physically equal opponents at once), Absorption and Existence Erasure (Melshee's Door consumes and completely destroys all matter and PSI energy, erasing anything in its path), Homing Attack (Melshee's Door is drawn to the PSI of others, allowing it to home in on them), Resistance to Telepathy (can let his mind go completely blank, preventing telepaths from reading it) | Previous powers upgraded, Is left in a Berserker-like state, Can use Melchee's Door over his whole body

Weaknesses: Melschee's Door will indiscriminately attack sources of PSI, regardless if they're friend or foe. Once an instance of Melshee's Door has absorbed and destroyed a certain amount of PSI energy and matter, it will vanish.

Melchsee's Door: (暴王の月（メルゼズ・ドア）, Bō-ō no Tsuki (Meruzezu no Doa)): Yoshina has the ability to create a concentrated ball of pure Burst energy in the form of a black sphere. This sphere seeks out any PSI energy in the area and completely absorbs it. It also eradicates any physical matter it touches. Once it absorbs enough PSI energy, it breaks down and starts to attack indiscriminately, shooting tree-like branches at all people who are using PSI, but as Amamiya shows, you can stop the attack by stopping your PSI. Ageha obtained full control of this ability by the end of the story, being able to create many black spheres with little effort.

Nova Melchsee's Version: Ageha was first shown using Nova when he used it to power his Rise high enough to save 07 from a point blank attack from Miroku. He has also demonstrated the ability to fly with his Nova activated. Ageha found training to achieve Nova easier than Amamiya, showing that he has a greater affinity to this form of PSI. When Ageha completed his Nova training he saw the Nova turn black on his shoulder which meant he knew about Melchsee's Door's power slipping in. At the start of Ageha's battle with Miroku he lost control of his emotions while in Nova, so Melchsee Door's power broke out from his hatred and anger. This turned his Nova from a brilliant white colour to pitch black with his hair grew longer and spikier, his facial features are hidden but his eyes remain visible and he also has multiple black rings floating around his head like a halo with multiple Melchsee's Doors floating around him. Ageha still has some control in this form.

Retrieved from "https://vsbattles.fandom.com/wiki/Ageha_Yoshina?oldid=6621727"
Community content is available under CC-BY-SA unless otherwise noted.