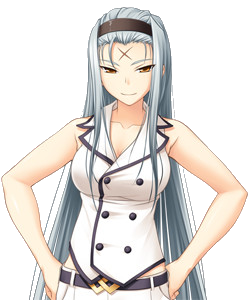 Ageha Kuki is one of the heads of the Kuki Group. She is also one of the members of The Big Four.

Powers and Abilities: Superhuman Physical Characteristics, Martial Arts, Extrasensory Perception (Samurai girls can sense gazes, even if it's indirect), Chi Manipulation, Aura, Energy Manipulation, Pseudo-flight, Resistance to Poison Manipulation (Those who have surpassed the limits of human strength are immune to all but a handful of poisons)

Retrieved from "https://vsbattles.fandom.com/wiki/Ageha_Kuki?oldid=6784677"
Community content is available under CC-BY-SA unless otherwise noted.