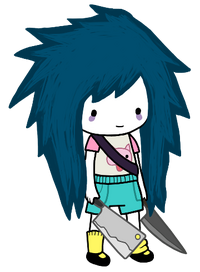 Agatha Knife is the daughter of a butcher and is in charge of killing the animals for the Butchers meat. Once the Butchers start to fail, she creates a religion, Carnivorism. Carnivorism is designed for animals to sacrifice themselves in service to an entity known as the Great Bleeding Pig.

Durability: Street level (Should be comparable to her attack potency)

Intelligence: Average, possibly Above Average (While she has been implied to have bad grades in school, she was the one who discovered about the vet using dog, cats, and birds for meat, and she has shown talent in cooking as well. She was the one who created Carnivorism)

Retrieved from "https://vsbattles.fandom.com/wiki/Agatha_Knife_(Character)?oldid=6950197"
Community content is available under CC-BY-SA unless otherwise noted.