VS Battles Wiki
Register
Don't have an account?
Sign In
Advertisement
in: Characters, TV Characters, Live-Action Characters,
and 23 more 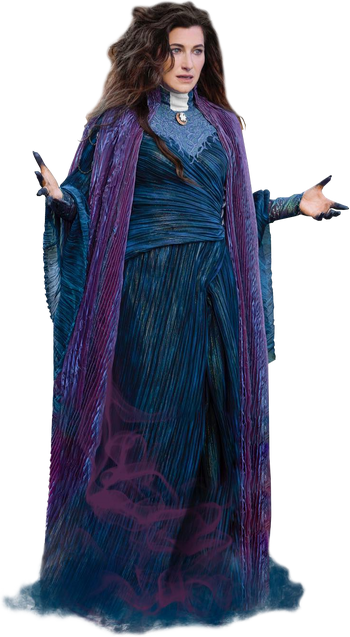 Agatha Harkness is a witch who was a member of the Salem Witch Coven, and daughter to its leader, Evanora Harkness. After being put on trial for execution in 1693 for practicing dark magic and betraying her coven, Agatha killed her clan and her mother through the use of her dark magic, after they attempted to execute her for her crimes. Agatha absorbed their magic in the process and took the brooch off of her mother's rotten corpse before flying off. Hundreds of years later in the modern day, Agatha resurfaced and took on the name 'Agnes' and entered the town of Westview, New Jersey to investigate the odd Pocket Reality created by Wanda Maximoff, encasing the town. Agatha then meets Wanda herself and observes her under the suspicion that Wanda may be the Scarlet Witch, a powerful mythical being referenced in the Darkhold, desiring to take her chaotic powers for herself.

Powers and Abilities: Energy Manipulation, Magic, Longevity (Has lived since the late 1600s), Flight, Telekinesis, Unholy Manipulation (Is a skilled practitioner of the Dark Arts), Absorption (Energy, Life, Power, and Magic based. Shown here, here, and here), Power Bestowal (Gave superhuman speed to Ralph by magically enhancing a necklace), Limited Power Nullification (Can cast a protection spell which prevents the use of magic in a limited area except for the person who cast the spell), Transmutation, Summoning (Can summon the Darkhold out of thin air), Teleportation, Purification (Can undo Mind Manipulation), Clairvoyance (Can see and hear through Ralph), Minor Memory Manipulation (Went through Wanda's memories) Telepathy, Mind Manipulation, Resistance to Telepathy (Wanda was unable to read her mind) and Mind Manipulation (Completely unaffected by the Westview Anomaly's affects on the mind)

Speed: Subsonic movement speed with Massively Hypersonic+ combat speed and reactions (Can keep up with Scarlet Witch in flight and combat)

Durability: Unknown (Unharmed by cars being thrown at her. Can tank blasts from an enraged Scarlet Witch, though this may be due to Absorption)

Intelligence: Gifted (Agatha possesses a notable amount of knowledge on magic and its various uses. Agatha has displayed advanced knowledge on several spells and has extensively studied magical artifacts such as the Darkhold. Agatha is also a skilled manipulator as she was able to sneak into Westview unnoticed and pulled several mishaps behind the scenes)

Weaknesses: Is left virtually powerless if her magic is drained from her. Can get overconfident and get caught off guard. Requires her target to use their magic in order to absorb it