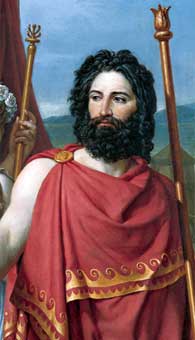 Agamemnon was the king of Mycenae and was the commander-in-chief of the Greek side in the Trojan war. His parents are King Atreus and Queen Aerope.

Tier: At least 9-B, likely Higher

Attack Potency: At least Wall level (Killed hundreds of Trojan soldiers, including Antiphus. His hands are described as being splattered with gore), likely Higher (Achilles admitted he was stronger than him. Never needed the gods to grant him strength and unfair advantages on the battlefields, unlike Achilles and Diomedes)

Speed: Superhuman (Powerscaling to Achilles. He also had a horse named Aetha)

Striking Strength: At least Wall Class (Killed Koon with a strike to his head), likely Higher

Range: Tens of Meters with javelin

Intelligence: A warrior with decades of battle experience, an experienced hunter, and an excellent general. Considered the best at javelin throwing.

Weaknesses: He is overly haughty, selfish, greedy, and disrespectful which has led him to insult Achilles, costing him much during the Trojan war.

Retrieved from "https://vsbattles.fandom.com/wiki/Agamemnon_(Myth)?oldid=4105942"
Community content is available under CC-BY-SA unless otherwise noted.