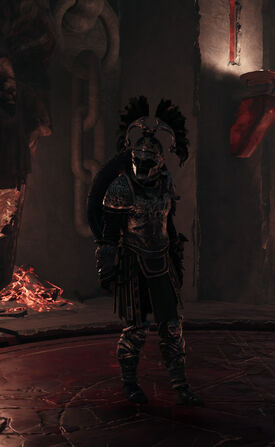 In Greek mythology, Agamemnon was a legendary king of Mycenae and the brother of King Menelaus of Sparta. Together with his wife, queen Klytaimnestra, Agamemnon fathered Iphigenia and Orestes. Agamemnon was prominently featured in Homer's works; the Iliad and the Odyssey. The authors Euripides and Sophokles also wrote of him.

In a simulation created by the Isu Aletheia, Agamemnon's soul resided in a vault connected to the Pit of Deprivation in the Chasm of Torment in Tartaros. He met the Spartan misthios Kassandra , who was sent by Hades to recruit him as a guardian of Tartaros. After being defeated by Kassandra, Agamemnon agreed and travelled to the Gate of the Unbowed to defend it.

Tier: At least 9-A physically, higher with weapons

Attack Potency: At least Small Building level physically, higher with weapons (Is one of the greatest warrior that have ever existed in History as the commander of the united Greek forces during the Trojan War. Stated to be one of the most dangerous warriors of the Underworld. Fought evenly with Kassandra)

Speed: At least Supersonic+ (Can keep up with the likes of Kassandra)

Striking Strength: At least Small Building Class (Can harm the likes of Kassandra)

Durability: At least Small Building level (Endured many powerful attacks from Kassandra without much difficulties as an undead. Immortality makes him very hard to kill)

Standard Equipment: His armor, His Sword, His Shield, Cursed Bow of Hades (as a Fallen Guardian)

Intelligence: High. Was the commander of the united Greek forces during the Trojan War and led them to battle for the ten years the conflict lasted.

Retrieved from "https://vsbattles.fandom.com/wiki/Agamemnon_(Assassin%27s_Creed)?oldid=4900703"
Community content is available under CC-BY-SA unless otherwise noted.