VS Battles Wiki
Register
Don't have an account?
Sign In
in: Characters, Afro Samurai, Manga Characters,
and 19 more 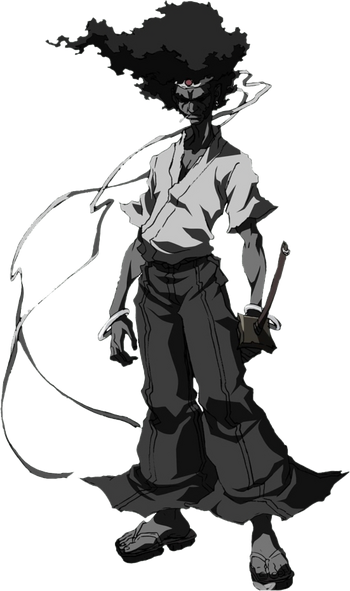 Afro is an incredibly talented swordsman whose father was decapitated in front of his own eyes as a child. That traumatic experience caused an innocent little boy to have a mind flustered with revenge and, with that, Afro grew into a cold-blooded killer, spilling the bloods of countless souls in his wake.

As the number two, Afro has killed many in defense and revenge for the ultimate goal of avenging his father.

Powers and Abilities: Superhuman Physical Characteristics, Master Swordsman, Acrobatics, Mid-Air Combat, At the end of the series he gets the number 1 headband, which apparently makes him invincible to anyone other than the wearer of the number 2 headband

Speed: Hypersonic (Can draw his sword and slice bullets out of the air after they are fired. Sliced a rocket out of the air and outran an explosion briefly while wounded), possibly Relativistic (Blocked a laser beam from Afro Droid at close range)

Lifting Strength: Superhuman (He was able to throw a huge guy across a room with one arm)

Striking Strength: Building Class (Strong enough to slice powerful bullets, block energy beams, slash and crack robots, and slice a rocket in half before it exploded)

Durability: Building level (Got kicked hard enough to break stone with his body. Survived the splash damage of an RPG while poisoned and weakened)

Stamina: Superhuman (Can go through long and painful fights and keep fighting while wounded lethally)

Standard Equipment: His katana and its sheath, afro pick, his spliff

Intelligence: Mastery of swordsmanship, experience fighting many enemies from superhuman monsters to martial artists to robots

Weaknesses: Sometimes distracted by his imaginary friend Ninja Ninja (But later he loses this weakness.)

Note: It was never specified why only the holder of the #2 Headband could fight the #1. This profile assumes that it was because the #1 is otherwise "invincible". 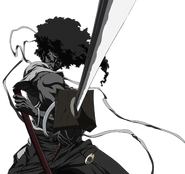