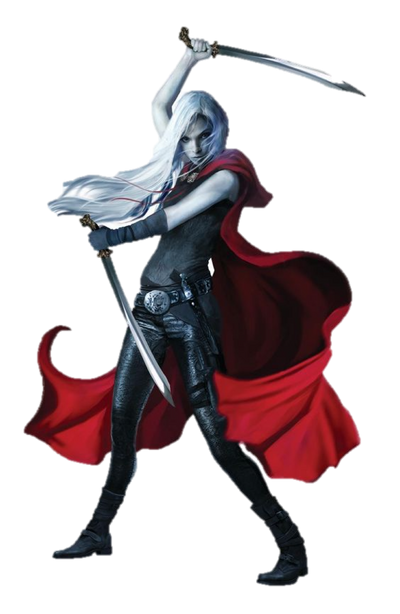 Aelin Galathynius, also known as Celaena Sardothien, is an assassin and the last surviving member of the Terrasen royal family.

Powers and Abilities: Superhuman Physical Characteristics, Weapon Mastery (With all hand weapons, and most non-firearm ranged weapons), Martial Arts (Fought a Valg commander bare-handed, and knows many types of martial arts), Stealth Mastery (Her role as an assassin required her to be a master of stealth and disguise), Preparation (With time to prepare, Aelin can draw Wyrdmarks that can create invisible force fields and/or paralyse her foes) and Resistance to Pain Manipulation (Years of torture at the hands of her masters have dulled her response to pain) | All previous including Superhuman Speed (Aelin is more than twice as fast as Celaena was), Enhanced Senses (All Fae have magically enhanced senses far greater than a normal person. Aelin can smell magic/intentions and see clearly in the dark), Transformation (Can transform from her human form to her Fae form at will), Magic (Every Fae has the ability to weild some form of magic), Fire Manipulation (Aelin's magical powers manifest with control of intense flame), limited Water Manipulation (Has a drop of water affinity, however fire is her prefered method of attack), Regeneration (Mid-Low, use of water magic heals Aelin's wounds), Weapon Creation (Can create any weapon she desires out of her fire), Durability Negation (Can use her fire magic to burn her target alive from the inside out), Forcefield Creation (Called up large walls of flame, and small shields made of fire at will) and limited Telepathy (Can communicate with Rowan telepathically)

Attack Potency: Wall level+ (Stabbed her dagger through Grave's hand and a stone wall, dismembered a person with her bare hands and can match those that can harm her) | At least Town level (Superior to Rowan, who could easily freeze a large lake. Matched three Valg princes while weakened. An eruption of her power almost burnt the entirety of Doranelle. Vaporised 500 skinwalkers with ease), negates conventional durability with fire magic

Speed: Athletic Human movement speed (Can consistently match trained guards such as Chaol) with Peak Human combat speed (Much faster and more agile than any opponent she fights, blitzed Grave and matched Rowan) and Subsonic+ perception and reaction speed (Can detect and react to a arrow fired at her) | Superhuman movement and combat speed (Should be at least doubly as quick as her human form. Slightly superior to Rowan)

Lifting Strength: Peak Human (Easily overpowered Grave, was the strongest slave in the Endovier Salt Mines and can fight with a heavy pickaxe) | Superhuman (Should be vastly superior to her human form)

Striking Strength: Wall Class+ | Wall Class+, likely higher (Should be superior to her human self)

Durability: Wall level+ (Survived a charge from the ridderak, who shattered a wooden door with a single blow) | Wall level+ physically, Town level with Fireshield and Aura (Can survive powerful magical attacks from other Fae)

Stamina: Very high (Survived for a full year in the Endovier Salt Mines, when most slaves do not survive for more than a week) | Extremely high (Sprinted at full pace for a full day and night, her magical stamina is vastly superior to even the most powerful Fae)

Intelligence: Gifted. In all forms, Aelin is intelligent beyond her years. She is tactically skilled, was able to decipher a dead language, and cast complex spells within the space of a few days. Tricked the King of Adarlan on multiple occasions, and was the first to discover her true identity

Weaknesses: Emotionally unstable | Use of her power is taxing for her. Excessive magic use will cause her to 'burn out', potentially killing her