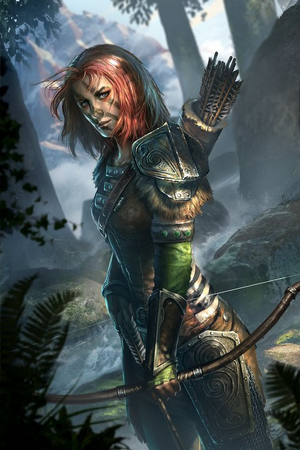 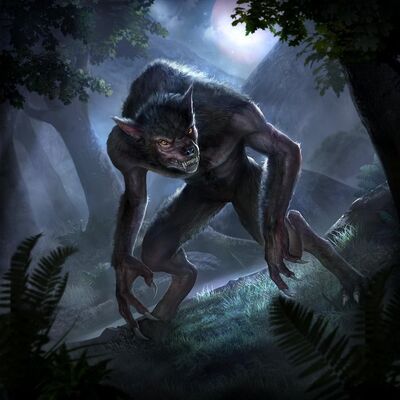 Aela the Huntress is an elite Nord warrior and member of the prestigious Companions, an ancient covenent of warriors that reside in Jorrvaskr. She meets the player outside of Whiterun, where she and her comrades are slaying a giant outside of the city of Whiterun, where she other chastises or commends the player depending on weather they jump in and help or stay idly by.

Like the other Companions, Aela suffers from the curse of Lycanthropy.

Classification: Nord, Human, Werewolf, Member of the Companions at Whiterun

Powers and Abilities: Superhuman Physical Characteristics, Master swordsman and archer, Stealth Mastery, Curse Manipulation (Can transmit the lycanthropy curse to others via blood), Transformation into a Werewolf, where she gains Enhanced Senses and Fear Inducement (Werewolf howls function identically to the Fear spell)

Attack Potency: Large Building level (When she meets The Last Dragonborn on their trip to Whiterun, she and the other companions are in the middle of slaying a giant, which are strong enough to do this with their physical strikes), higher as a werewolf (Able to casually tear apart humans with her bare claws. Stronger than before)

Speed: At least Subsonic (As a warrior of great renown, she should at least be comparable to Redguard soldiers capable of dodging arrows)

Lifting Strength: Athletic Human (She's a trained athlete, one of the strongest people in Whiterun)

Durability: Large Building level (Can take hits from Giants),  higher as a werewolf

Stamina: Presumably above average. Able to go out on expeditions to hunt various beasts and predators and engage in extended combat, and trains every day around Jorrvaskr

Range: Standard Melee Range, Dozens of meters with her bow

Intelligence: She's a renowned warrior and hunter, who is ironically skilled in stealth and tactics. However, she tends to lack in magical and general knowledge

Weaknesses: She takes significantly more damage from silver weapons as a werewolf

Retrieved from "https://vsbattles.fandom.com/wiki/Aela_the_Huntress?oldid=6214394"
Community content is available under CC-BY-SA unless otherwise noted.