VS Battles Wiki
Register
Don't have an account?
Sign In
Advertisement
in: Tier 8, Tier 8-B, Characters,
and 26 more 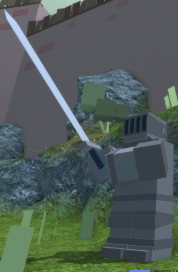 The Adventurer is the name briefly given to the player in the tutorial within the LUA-based adventure RPG Fantastic Frontier. The motives of the adventurer are unknown, however, the tutorial describes that they generally collect and hunt for various items throughout the Frontier with intentions to sell to Big Box to obtain improved equipment in order to collect even more valuable items and so on and so forth. Due to this, the adventurer generally comes equipped a variety of weaponry, tools, and armor to assist them in hunting and collecting for valuable items.

Name: Briefly referred to as an 'adventurer' in the tutorial, but can vary between different players

Powers and Abilities: Superhuman Physical Characteristics, Weapon Mastery (Of spell tomes, hammers, greatswords, scimitars, rapiers, rifles, crossbows, spears, daggers, etc.), Enhanced Senses (Can increase the distance they can see at via equipment), Healing (Via food items), Statistics Amplification (Various food items found via fishing can increase the players life regeneration, jump height, defense, and damage respectively), Teleportation (Able to - every 15 minutes - teleport back to Topple Town), Regeneration (Low-Mid Via equipment or consumables; able to heal from being crushed by giant swords larger than their entire body from enemies such as these), Magic (Able to increase their magic potency via equipment), Shapeshifting (Can turn into a ratboy via ratboy ring, although, this is purely cosmetic), Capable of attacking intangible entities. Able to fight against ghosts that can phase through walls), Light Manipulation (Via bronze lamp; can generate light), Summoning (Can summon a floating boombox that plays music at will) | Same as before to a greater extent, Fire Manipulation (Via Inferno Hammer, Firesoul Spellbook, and Inferno Sword), Darkness Manipulation (Via Darktoad Spellbook, Life Manipulation (Via Darktoad Spellbook and Rusted Coin Scythe; can return a portion of damage dealt to an enemy in order to heal themselves), Electricity Manipulation (Via Buzzing Sword) | Same as before to a higher extent, Energy Projection (Via Frontier Greatsword, Fantastic Greatsword, and Celestial Power Spellbook; able to conjure laser beams with the listed weapons), Holy Manipulation (Via Angel Greatsword; their description states that an angel inhabits the blade and their special ability can raze opponents in a holy light), Flight (Via wings)

Attack Potency: City Block level (Capable of damaging other players within PVP zones as well as the Ancient Iron Knight) | City Block level (Capable of contending with the Ancient Cobalt Knight and should be notably stronger than before) | At least City Block level+ (Stronger than before, and can fight against the Ancient Golden Knight as well as enemies that should be far stronger than them), likely higher (Frontier weapons state to have the raw essence of the frontier sealed inside of them - the frontier's magic of which is stated to be capable of corrupting the creatures of the frontier, which is essentially an island with a mountain on it - as well as damaging Mr.58 itself. Capable of damaging players wearing galaxy wizard armor, which is stated to be made out of stars)

Speed: Hypersonic (Can dodge attacks from the five ancient knights - whom of which are all capable of swinging several times faster than the velocity of an electrical attack), higher through various items

Lifting Strength: Class 5 (Able to wear gold armor as well as wield a greatsword made out of solid gold while remaining nearly unimpeded the aforementioned weight)

Stamina: Very high (Capable of fighting for hours, and can regenerate their stamina very quickly after swinging around solid, heavy hammers), Low flight stamina (Can fly for several seconds with wings, but can make up for this by regenerating stamina in the air while holding onto a mushroom parasol to glide)

Standard Equipment: Various weapons including greatswords, guns, crossbows, magic spelltomes, and lances in addition to armor and healing items. The entirety of the adventurer's arsenal can be found here.

Intelligence: Very knowledgeable on combat and can use a plethora of different weaponry with relative ease, and can easily adapt to certain combat situations (E.G, focuses on avoiding attacks while using small timeframes/delays to attack an enemy if they can easily harm the adventurer with their attacks). Can document every single collectible object in the game.

Weaknesses: Various attacks use stamina, which can recover over several seconds (Though, this is somewhat mitigated with the existence of armor that can increase a player's endurance, thus decreasing the stamina cost for various actions); generally less durable than they are capable of outputting damage (This is prominent throughout the early/mid parts of the game); teleportation can be interrupted if attacked and has a delay of three seconds; cannot regenerate health without equipment or certain consumables (Though, healing items regenerate lost health instantly upon use); certain equipment can reduce their defensive capabilities and even damage them over time (In return for benefits that generally increase damage and the like); ranged weapons (Rifles, Frontier Stargun, and crossbows) require ammo to be utilized.

Notable Attacks/Techniques: Various weapons throughout the game have differing special attacks, notable ones include: