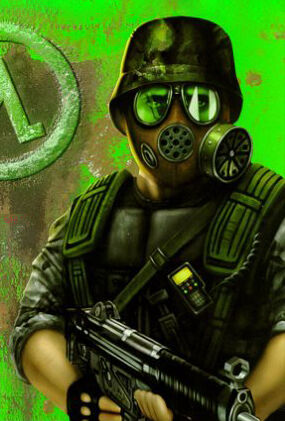 Adrian is a marine of the HECU. He was sent to Black Mesa to clean up the whole place of both life and proof of what happened there. Before reaching the base, his helicopter crashes and he is forced to wander the facility alone.

His current fate is unknown, because he was "silenced" by The G-Man

Tier: 10-A, 9-C with the wrench and small firearms, 9-B with several weapons

Powers and Abilities: Peak Human Physical Characteristics, Superhuman Durability, Weapon Mastery (Highly adept with firearms, melee weapons and explosives as well as alien weaponry), Proficient Hand-to-Hand Combatant (Received extensive military training), Acrobatics (Shephard is known for his astounding agility among the HECU Marines), Explosion Manipulation (With the RPG, Grenades, Tripmines and a variety of other equipment), Energy Projection (With the Spore Launcher and Displacer Cannon), Electricity Manipulation (With the Shock Roach), Limited Teleportation (With the Displacer Cannon, however he can only teleport to Xen)

Attack Potency: Athlete level physically, Street level with his wrench, knife and most firearms (His wrench can gore people with ease and one-shot most enemies with a charged blow), Wall level several weapons (The tripmire, the satchel charge and the grenade can turn people to gibs and weaker Xen creatures. The Spore Launcher can break armor as tough as the one he has in one shot and the Displacer Cannon can turn an entire small room of enemies into gibs)

Durability: His armor grants him at least Wall level durability (Can take small explosions, a crash landing from a plane and shots from heavy weaponry with some difficulty)

Stamina: Peak Human (He was fighting off Xen beings and Race-X creatures for several hours before G-Man picked him up)

Intelligence: Above Average. A highly skilled soldier with years of experience on the battlefield. Was one of, if not the only Marine to survive the Black Mesa Incident, which prompted even the G-Man to praise him for his skills.

Weaknesses: Without his armor he is as durable as a normal man, if the suit takes too much damage it will need to be recharged

Retrieved from "https://vsbattles.fandom.com/wiki/Adrian_Shephard?oldid=6974055"
Community content is available under CC-BY-SA unless otherwise noted.