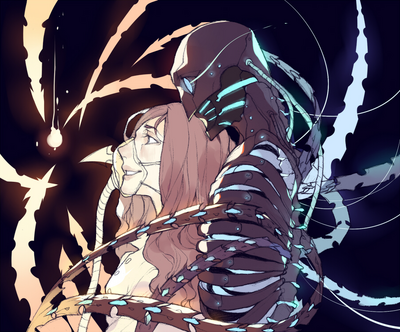 Agent Adrian Andrews was a former assistant researcher for the Foundation. He was quickly appointed the role of lead researcher for the Foundation's Mobile Task Force Omega-7 "Pandora's Box" after the previous researcher died, in which he managed to make a connection with SCP-076, earning him a spot in Pandora's Box as a field operative. During the events of 'Incident Zero' Andrews was grievously injured, a shard of metal piercing his skull and damaging part of his brain, leaving him permanently bedridden as a result. The Foundation, not wanting to lose an experienced operative, approved Andrews to undergo reconstructive enhancement surgery with the use of SCP-212. However, rather than repair his body, SCP-212 transformed Andrews into a living colony of self replicating nanomachines, leading Andrews to be declared KIA and reclassified as SCP-784.

Superhuman Physical Characteristics, Immortality (Type 1), Nanotechnology, Shapeshifting (SCP-784-ARC's nanomachine colony is able to freely change shape and form at will), Technology Manipulation (Capable of directly interfacing with electronic devices), Matter Manipulation (Capable of breaking down and reassembling matter on a molecular level), Absorption (Can absorb any material into itself and break it down into nanomachines), Enhanced Senses (Able to detect vibrations in the air in his surroundings), Possession (Able to take control of the bodies of living beings by replacing their brains with nanomachines)

Attack Potency: Human level, Street level with weapons (Most MTFs possess mundane weaponry such as FN P90s) | Wall level (Disemboweled Dr. Clef while using only the fraction of his nanites that he used to control the body of Director Valentine, Casually crushed multiple Foundation personnel into paste)

Speed: Average Human | Superhuman (Crossed 30 meters nearly instantly and was too fast for multiple people to keep up with)

Intelligence: Gifted (Noted by SCP-076 as a brilliant strategist and the only member of Pandors'a Box who he recognizes as a general and strategist rather than just a soldier. During his time in Pandora's Box he helped capture and contain over a dozen SCPs, three of which were Keter-Class.)

Weaknesses: Normal human weaknesses | Individual nanomachines cannot function without a physical connection to the biological portion. Exposure to heat above 100 degrees C or certain solvents (Such as a 100% acetone solution) will cause the nanomachines to denature in a manner similar to proteins. Strong enough EMPs will kill him.

Retrieved from "https://vsbattles.fandom.com/wiki/Adrian_Andrews?oldid=6950194"
Community content is available under CC-BY-SA unless otherwise noted.