VS Battles Wiki
Register
Don't have an account?
Sign In
Advertisement
in: Tier 9, Tier 9-B, Versus Umbra,
and 25 more 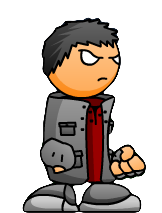 Adrian is the main character of Versus Umbra's main campaign "First Strike." After helping Kameth fight off a siege from their neighbor planet, he pursued the mastermind behind the invasion, arriving at Nivaga and taking out "The Leader." For accomplishing this, Paradox offered him a spot in the galaxy-spanning organization Umbra. After rejecting the offer, Paradox trapped him in an infinite time-loop, spanning the events of the campaign.

Speed: At least Athletic Human (Comparable to soldiers, while he can react to and dodge bullets they're shown to move much slower than conventional speeds), higher with Fast Forward (Moves more quickly while time is slowed)

Range: At least tens of meters, likely hundreds of meters with firearms

Weaknesses: His weapons can only hurt things that are trying to hurt him.