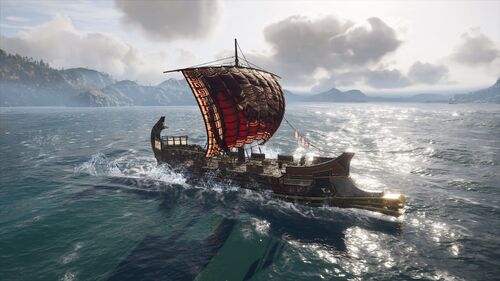 The Adrestia was a trireme captained by the Greek Barnabas, in service to the Spartan misthios Kassandra, during the Peloponnesian War.

For a time, it was under the command of the Cyclops of Kephallonia, who had hired Barnabas' crew before the former's death at the hands of Kassandra. From then onwards, Barnabas and the Adrestia served at Kassandra's disposal; it travelled throughout the Aegean Sea in her quest to defeat the Cult of Kosmos and reunite her family.

Attack Potency: Building level (Can cleave through octaremes in a single charge and tear them apart)

Speed: Normal Human (Incredibly slow sailing speed, at 7.37 knots judging via average trireme speeds), Superhuman via charging (Can outpace great white sharks and even dolphins, which can reach 60 km/h on average). Subsonic with arrows and spears

Lifting Strength: At least Class 50 via virtue of size (Judging by the fact that the average-sized Olympias in real life weighs in at 47.3 tons, the Adrestia should probably weigh the same), higher by itself (Can stop charging octaremes dead in their tracks)

Retrieved from "https://vsbattles.fandom.com/wiki/Adrestia_(Assassin%27s_Creed)?oldid=6277150"
Community content is available under CC-BY-SA unless otherwise noted.