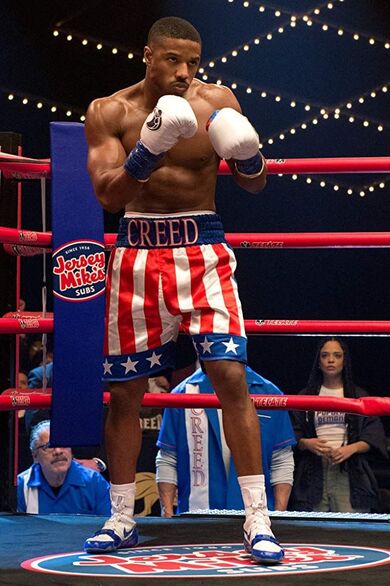 He is the youngest biological son of Apollo Creed. Adonis was the result of an affair that Apollo had with an unknown woman. Adonis biological mother passed away at a young age resulting in Adonis being placed in a youth facility until he was discovered by Apollo's wife Mary Anne Creed. Adonis was raised with wealth and received a full education resulting in him being able to land a well-paying office job. Despite his education and job, Adonis chose to pursue boxing on the side, fighting in Mexico. During the events of Creed, Adonis chooses to pursue boxing full-time and quits his job, seeking out Rocky Balboa to train him in Philadelphia. Balboa was reluctant, but agreed and trained Adonis. Adonis won his first fight, but it didn't take long for the word to get out that he was a Creed. Adonis was then approached by Light Heavyweight Champion Ricky Conlan for a fight, Conlan was due to serve prison time and wanted one last big fight before he went away. Adonis went the full 12 rounds with Conlan but lost via split decision.

Attack Potency: Street level (Any boxer like him can easily hit this hard. Curbstomped a bunch of prisoners off-screen, easily defeated an amateur boxer, and later defeated Kevin "The Bank" Grier, the sixth-best pound-for-pound boxer very early in the first movie. Later with training, he almost defeated "Pretty" Ricky Conlan, the best pound-for-pound boxer in the world, after being brutally being beaten by him, and lost only because of split-decision. Later defeated even Wheeler himself) | Wall level (Ultimately trained just as hard as Viktor Drago, knocked him down three times in a row and later initiated a brutal beatdown on him in their second fight, forcing his father Ivan Drago to throw in the towel to save his son from being severely injured or killed)

Speed: Peak Human (Managed to run on par with a motorcycle to some degree. Effortlessly blitzed Kevin Grier in the first part of the film, then dodged several attacks from Danny "Stuntman" Wheeler, the second-best pound-for-pound boxer at the time, moments later, although he was blitzed and defeated. Later keeps up with his 1967 Ford Mustang in Creed II) with Superhuman punching speed (Boxers can generate punch speeds exceeding 15 m/s).

Lifting Strength: Peak Human (Not long after sustaining heavy injuries from his fight with Viktor Drago, he was pushing himself to his absolute limits, and underwent a brutal training regime to get back into the ring) | At least Peak Human (Thanks to his brutal training regimen, he was now capable of lifting much heavier weights and was easily capable of pushing Viktor back)

Striking Strength: Street Class (Curbstomped a bunch of prisoners off-screen, KOed a security officer with a single punch. Went toe-to-toe with Conlan and broke his ribs with a few punches) | Wall Class

Durability: At least Street level (He was beaten heavily by the best pound-for-pound boxer for 12 excruciating rounds and still managed to keep going. Upon his first fight with Viktor Drago, Adonis took a massive beating from the Ukranian boxer, sustaining multiple injuries like broken ribs and whatnot and was standing for the first few rounds, but ultimately lost) | Wall level (Endured the same brutal training regimen as Viktor. Although he suffered the same ordeal against Viktor, suffering multiple lethal injuries and was knocked down, Donnie ultimately got up in a fit of rage and started brutally beating Viktor down without showing any sign of mercy)

Stamina: Very High (He was beaten heavily by Conlan for 12 rounds and managed to keep going without much hindrance. Even after sustaining multiple broken bones and severe organ damage from his first fight with Viktor Drago, Adonis was still refusing to back down. In their second rematch, Donnie's sheer rage ultimately allowed him to brutally triumph over Viktor despite having suffered the same injuries as his first fight against Viktor)

Intelligence: Quite High (Was a successful businessman before he quit his job)

Weaknesses: If someone calls him "Baby Creed" or insults him by calling him unworthy of his father's name, he gets violent. Just like his father, he refuses to give up no matter how bad the fight may go in for his favor. Once enraged, he might not stop until his opponent is severely injured or even killed.

Retrieved from "https://vsbattles.fandom.com/wiki/Adonis_Creed?oldid=7009144"
Community content is available under CC-BY-SA unless otherwise noted.