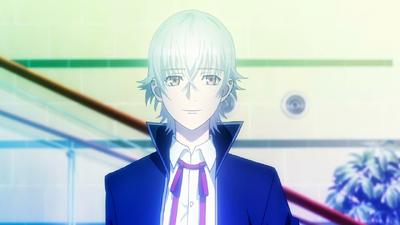 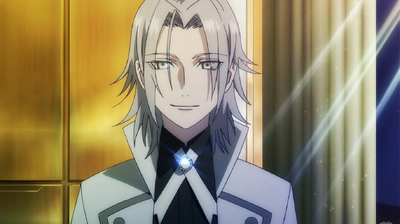 Adolf K. Weismann (アドルフ・K・ヴァイスマン, Adorufu Kā Vaisuman) is the main protagonist of the K anime series and the First and Silver King, formerly a researcher in Germany who experimented with the effects of the Dresden Slate. Years later, he was ejected from his original body by the Colorless King and has since inhabited the body of a male teenager in Japan. This event has left him amnesiac and resulted in Weismann assuming a new identity, Yashiro Isana (伊佐那 社, Isana Yashiro)

Attack Potency: Small Town level (He and the Golden King are the strongest and highest ranking among the Kings)

Speed: At least Hypersonic (Superior to the other kings, reacted to Tenkei Iwafune's bullets)

Durability: Small Town level (Superior to the kings. Immortality and Regeneration make him Hard to kill)

Intelligence: Genius (Former Scientist. The Silver King's mind operates in the most efficient and rapid manner possible some manifestations of this are his exceptional leadership, analytical, scientific and tactical genius.the ability to quickly process multiple information streams rapidly respond to any changing tactical situations, by rapidly creating perfect winning strategies. He has a strong memory that can remember things that happened a century ago)

Weaknesses: If his powers reaches its maximum limit, his sword will collapse and explode

Silver Aura: Despite switching bodies with that of the Colorless King, Weismann retains the use of his Silver Aura. Through this Aura, Yashiro is granted the power over gravity manipulation where he can levitate himself or anyone he has synced his Aura with

Retrieved from "https://vsbattles.fandom.com/wiki/Adolf_K._Weismann?oldid=6942292"
Community content is available under CC-BY-SA unless otherwise noted.