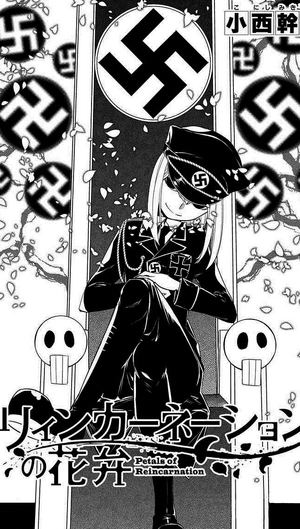 Adolf Hitler is one of the Returner members of Kouu's army and one of Kouu's Five Generals. Hitler mostly acts as a duo with Pol Pot, since she's not a fighter.

Powers and Abilities: Shares the senses of any living being that it's in contact with a Hakenkreuz

Attack Potency: Human level (Claims to have no means of fighting, which is why she relies on Pol Pot)

Stamina: Above average (Usage of Returner talents uses up a lot of mental and physical energy)

Intelligence: High, analyzed the talents of Greats and came up with their weaknesses and shortcomings, can see through enemy tactics, takes measures to hide the true nature of her ability, tricked and defeated both Newton and Einstein by having Pol Pot pretend to have a lesser range than what he truly has to catch them by surprise

Start a Discussion Discussions about Adolf Hitler (Petals of Reincarnation)