VS Battles Wiki
Register
Don't have an account?
Sign In
Advertisement
in: Tier 9, Tier 9-B, Kung Fury,
and 20 more 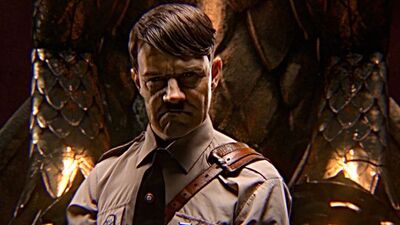 In Nazi Germany during the 1940s, Hitler knew of the Kung Fury prophecy and wanted to become the chosen one. So his Nazi scientists conducted experiments to try and discover how Hitler could claim the throne, but these tests failed and Hitler disappeared, never seen again until 1985 in Miami, he made his reappearance when he murdered the Chief of Police for the Miami Police Department by calling him and then shooting through the phone.

Looking to avenge the Chief, Kung Fury gets the best hacker of all time, Hackerman, to send him back in time to kill Hitler.

Classification: Human, Leader of The Nazis

Powers and Abilities: Superhuman Physical Characteristics, Martial Arts (Any kind of Kung-Fu), Weapon Mastery (Of his Gatling gun), Technology Manipulation (Murdered the Chief of Police for the Miami Police Department by calling him and then shooting through the phone), Social Influencing (Managed to recruit many soldiers to be Nazis), Possibly Longevity (Seemed to not have aged as of 1985)

Lifting Strength: At least Class 20 (Should compare to Kung Fury; who Picked up a Panzer and used it as a club, then threw it), likely Class K (Scales to Kung Fury; who managed to rip off a spine. Ripping off a spine would require around 1 million newtons, or 101~102 tons-force)

Durability: Wall level (Survived being punched in the private parts, and launched into mid air by Kung Fury)

Intelligence: Above average (Was a Kung Fu champion, and leader of the Nazis)