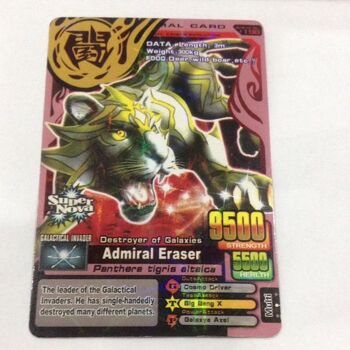 Admiral Eraser is the leader of the Galactic Invaders. He is known for destroying planets and even galaxies and is willing to do whatever possible to help Vertus achieve his goal

Classification: Destroyer of Galaxies, Leader of the Galactic Invaders

Attack Potency: Galaxy level (Known as the destroyer of galaxies. Is the leader of the galactic invaders, each of whom can destroy galaxies) | At least Multi-Galaxy level (Is far stronger than before and has surpassed the likes of Vertus)

Speed: Massively FTL+  (Even the weakest of animals are capable of this, and Admiral Eraser should somewhat be comparable to Vertus) | Massively FTL+

Retrieved from "https://vsbattles.fandom.com/wiki/Admiral_Eraser?oldid=4685497"
Community content is available under CC-BY-SA unless otherwise noted.