VS Battles Wiki
Register
Don't have an account?
Sign In
Advertisement
in: Characters, Warhammer 40,000, Factions,
and 49 more 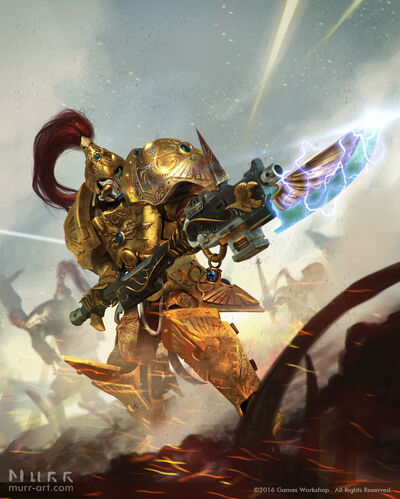 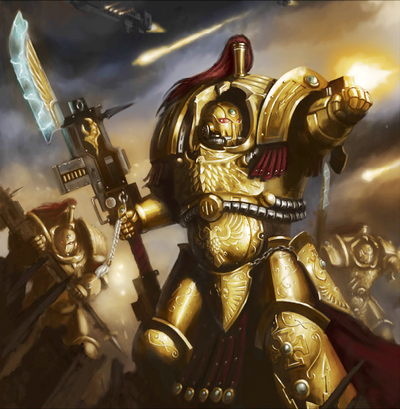 "Each one of the Ten Thousand represents genetic lore acquired over many lifetimes. Each one of you is unique, a work of art never to be repeated. I am miserly with your lives, where I would spend so many others without a thought."
- The Emperor on his Custodes

The Adeptus Custodes, known as the Legio Custodes before the Horus Heresy, is the Imperial Adepta responsible for guarding the Imperial Palace and the physical body of the Emperor of Mankind. It is an elite cadre of genetically-engineered transhuman warriors who are even more potent in combat than the Adeptus Astartes. They are to the Space Marines as the Emperor is to His Primarchs, and it is rumoured that they were created using the Master of Mankind's own genecode.

Where Space Marines represent the mass-produced genetic soldiers of the Imperium, the Adeptus Custodes are a force of individual warriors, each a bastion in his own right. These warriors have stood in the presence of the immortal Emperor of Mankind since before the time of the Unification Wars. For ten thousand years and more, the Custodians have stood watch over their lord and master, serving as the Emperor's personal guardians and praetorian bodyguard. During the Great Crusade these resplendent warriors guarded the Emperor wherever He went and swore to give their lives to protect His.

After His incarceration in the Golden Throne following the Horus Heresy ten standard millennia ago, they have taken a far more limited role in the Imperium of Man. They almost never leave Terra and only very rarely leave the Imperial Palace as they watch over their recumbent master and patrol the precincts of the Emperor's Palace, ever vigilant of threats. It is only the Adeptus Custodes who decide who may enter the Sanctum Imperialis of the Emperor at the heart of the Inner Palace, and when they may do so.

Name: Adeptus Custodes, the Brotherhood of Demigods, the Golden Legion, the Custodian Guard, Watchers of the Throne, the Ten Thousand, the Thousand Companions

Superhuman Physical Characteristics, Enhanced Senses (Each Custodian has his senses augmented to a degree far beyond an ordinary human being and even beyond a baseline Astartes warrior. Furthermore, their extremely sophisticated armor likely contains even more sensitive and advanced electronics than the armor of Space Marine Terminators, which allows said Terminators unparalleled awareness of nearly any battlefield), Immortality (Types 1 and 3), Regeneration (At least High-Low), Precognition (Can "reach into the Numerology of the near future" to predict the attacks and motion of enemies before they occur), Aura, Holy Manipulation, Probability Manipulation (The Custodians are touched by a spark of the Emperor’s own power, which manifests as a supernatural warding, making it so that bullets and bolts are turned aside at the last moment, blades fail to strike home, and even the psychic powers of the foe can suddenly and inexplicably flicker away to nothing), Energy Projection, Weapon Mastery (Custodians spend many centuries honing their crafts, mastering all the different weapons at their disposal with unmatched skill), Martial Arts (Custodes are some of, if not the deadliest single combatants in the entirety of the Imperium of Man, sans the Emperor and his Primarchs, and as such their close-quarters combat skills are similarly nigh-unmatched), Technology Manipulation (They interface with their suits as a second skin, implying they have some kind of Black Carapace equivalent that could allow them to meld their nervous system with other equipment as well), Vehicular Mastery (All Custodes are trained in the use of vehicles, such as tanks, anti-gravity jetbikes, and more, many of which are the most complex and advanced of their kind in the entire Imperium), Stealth Mastery (Custodians constantly have to protect the Imperial Palace, a vast sprawling complex the size of countries, making them as much intelligence agents and spies as warriors. The Custodes used to run the Officio Assassinorum during the time of the Great Crusade, and the Captain-General during the end of the Reign of Blood managed to easily sneak through the blockade of Vandire's heavily fortified palace manned by the superbly trained Brides of the Emperor straight to their leader), Matter Manipulation (Power weapons disrupt the bonds of matter by surrounding themselves in an energy field, of which the Custodes possess some of the most potent examples of. Adrathic weapons are capably of completely breaking the bonds between molecules, erasing any target), Durability Negation (Power weapons can disregard durability via their power fields, while meltas can quite literally break the bonds of matter at a high-enough heat. Adrathic weapons can destroy matter on a molecular level, making it as if the target had never existed), Heat Manipulation (Via Meltas), Fire Manipulation (Via Flamers), Explosion Manipulation (Via various weapons), Plasma Manipulation (Via Plasma Grenades), Limited Flight (Via Venatari Squads, which possess Jump Packs), Forcefield Creation (Via refractor fields, Iron Halos and the like), Statistics Amplification (Via Vexilla Imperius, Imperial Standards that reinvigorate and even supercharge the power of nearby Custodes), Light Manipulation (The Vexilla Magnifica shines a blinding light upon enemies), Biological Manipulation (Those who stare upon the Magnifica have their very optic nerves burned out), Perception Manipulation (Those who stare upon the Magnifica have their very sight rebel against them), Mind Manipulation (As a final effect, those who gaze upon the Magnifica have their thoughts patterns destroyed), Genius Intelligence, Resistance to Magic, Poison Manipulation, Disease Manipulation, Telepathy, Soul Manipulation, Radiation Manipulation, Heat Manipulation, Possession, Madness Manipulation, Corruption (Type 1 and 2), Pain Manipulation (Possess all the qualities of the Space Marines enhanced to an ever greater level, and almost complete immunity to afflictions from the Warp, as no Custodian has ever been stated to have fallen to the corruption of Chaos)

Nearly the same as before, with most abilities increased to higher level due to the better equipment available to Terminator veterans, along with Teleportation via Dimensional Travel (Can use the Warp for nigh-instantaneous teleportation)

Nearly the same as before, with most capabilities vastly improved by the massive Dreadnought walker, along with Large Size (Type 0), Cyborgization (Normal; The Custodian inside is usually reduced to several organs floating in an amniotic soup inside the cybernetic sarcophagus)

Attack Potency: At least Large Building level (The Custodes are said to be to a Space Marine what a Space Marine is to an ordinary human. 1,000 Custodians were capable of destroying Gharkhul Blackfang's Ork WAAAGH which had overwhelmed three Space Marine armies, killing 100,000 Orks and losing only 3 of their own. During the Battle of Prospero, a squad of 30 Custodians led by Constantin Valdor killed over 200 Thousand Sons Marines, 4 Librarians and a squad of 10 Terminators, and another sole Custodian slayed 4 Sekhmet Terminators by himself. The Guardian Spears of the Adeptus Custodes can cut through Terminator plate as easily as paper). Several weapons ignore conventional durability | At least Small Town level, likely far higher (An Adeptus Custodes' Terminator armor is far more powerful than the Terminator armor of a Space Marine, and carries much greater weaponry, which should also be able to harm other beings of comparable durability) | At least Small Town level, likely far higher (Custodes' Dreadnoughts are likewise far superior to regular Dreadnoughts, and Custodian Terminators as well)

Speed: At least Subsonic movement speed (Much faster than Astartes), with FTL combat and reaction speed (Even the weakest Custodes have reactions far faster than that of Marines, and average Custodes can react and process information in less than a microsecond. Skilled Custodes should undoubtedly have faster reactions than experienced Marines who can react in a nanosecond. Custodes have been shown capable of reacting to lasfire) | Subsonic (A Custodes in Terminator Armor is generally as fast as an Astartes in regular Power Armor) with FTL combat and reaction speed (As far more experienced veterans, they should be superior to most other Custodes) | Unknown movement speed with FTL combat and reactions (Only the most skilled and exceptional warriors of the Custodes are placed in Dreadnoughts)

Durability: At least Large Building level (Custodes' Auramite armor is far more durable than Astartes' Terminator armor, which can endure high-end plasma weapons) | At least Small Town level (As above their Auramite armor as regular Terminator plate is above Astartes' power armor. Can survive the explosions of Macro-cannon shells, which are in the kiloton range at the very least), likely far higher (Macro-cannons can be capital ship grade weaponry, which could potentially mean they could output energy comparable to this) | At least Small Town level, likely far higher (Superior to regular Dreadnoughts which can shrug off the strongest plasma weapons, as well as Custodian Terminators)

Stamina: Extremely high (Custodians can fight for weeks on end with many debilitating injures, some which would kill regular humans several times over. They can still fight with half of their face missing as well as a portion of their skull removed entirely, and hardly anything less than a killing shot can put them down. Custodians towards the end of the Webway War had been fighting a weeks long campaign with no sleep and barely any rest at all)

Intelligence: Genius (The Adeptus Custodes have an intellect enhanced far beyond that of the Astartes, combined with millennia of knowledge, combat training and experience. Their training and education renders them masters in the tenets of warfare in all its forms, as well as every method of assassination, counter-espionage, threat recognition and death dealing known to Mankind, but also in far more esoteric disciplines such as diplomacy and statecraft, astrogation and interstellar geography, history, philosophy, theosophy, artistry and countless other subjects)

Note: This profile only contains stats for the average/baseline Custodian. Individual characters can possess much greater feats and subsequently rank far higher.

The Legio Custodes accompanied by the Sisters of Silence, fighting alongside The Emperor in the Webway War