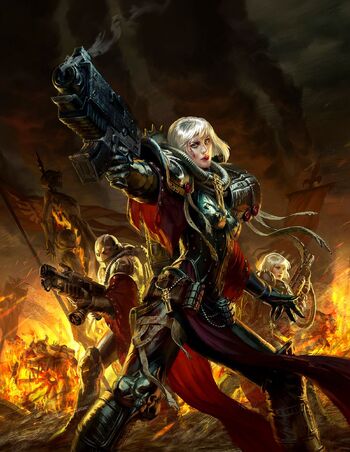 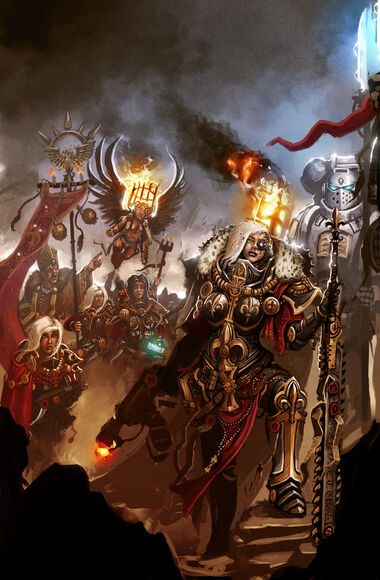 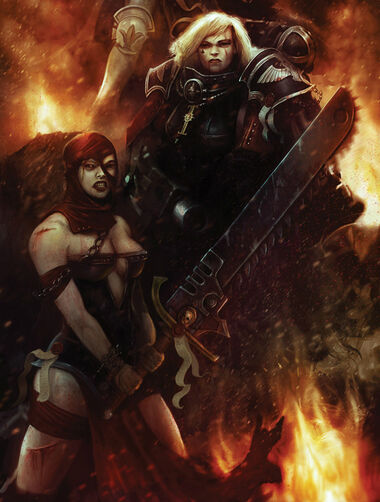 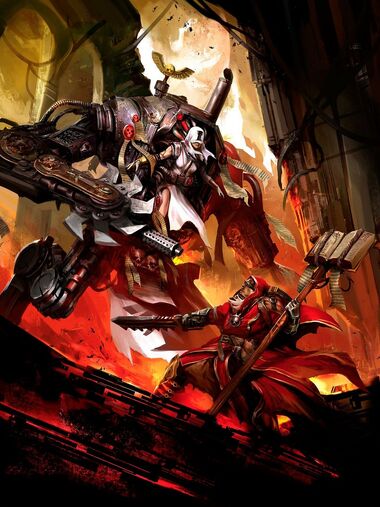 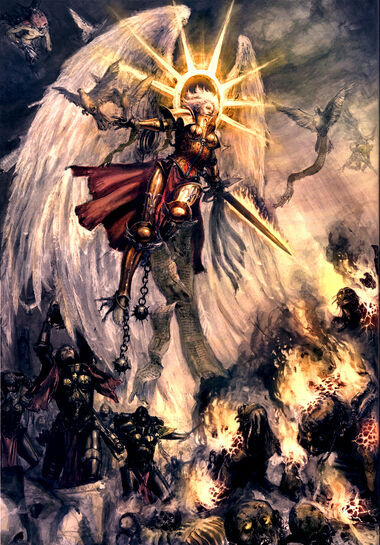 The Adepta Sororitas, formerly known as the Daughters of the Emperor, are an all-female division of the Adeptus Ministorum. The Orders Militant of the Adepta Sororitas, more commonly known as the Sisters of Battle, are the Ministorum's only official military force, as the "Decree Passive" laid down by the reformist Ecclesiarch Sebastian Thor held that in the wake of the Age of Apostasy of the 36th Millennium, the Ecclesiarchy cannot maintain any "men under arms." This was supposed to limit the power of the Ecclesiarchy. However, the Ministorum was able to circumvent this decree by using the all-female military force of the Sisterhood's Orders Militant.

The Sisters of Battle are an elite sisterhood of warriors raised from infancy to adore the Emperor of Mankind. Their fanatical devotion and unwavering purity is a bulwark against corruption, heresy and alien attack, and once battle has been joined they will stop at nothing until their enemies are utterly crushed. Battle Sisters will stride through fire if need be, their bolters spitting staccato bursts of destruction every step of the way. Not even death can stay the wrath of the Adepta Sororitas—indeed, the blood of martyrs only strengthens the resolve of Battle Sisters, spurring them to greater acts of heroism in the name of the honoured fallen.

Indeed, to the Adepta Sororitas, the disciplines are nigh inseparable, for whilst combat drills and studies of battle tactics can hone the body and the mind, only penitent prayer can bolster the spirit, and all three are required to defeat the Imperium's foes. The combination of combat doctrine and prayer is most evident on the battlefield, where Battle Sisters loudly proclaim their faith in hymn and verse as they march to war, calling upon the Emperor to aid them in the fight against their enemies. The perfervid, unquestioning nature of this faith is a potent weapon indeed, manifesting as divine inspiration that drives the Sororitas to unprecedented feats of martial prowess. Sisters of Battle gripped with holy fervour banish worldly fears from their minds, shrug off mortal wounds, and summon preternatural strength to smite their foes. The Sisters of Battle believe their faith to be a weapon stronger than any steel, and those who witness their battlefield miracles are left in no doubt that the spirit of the Emperor indeed walks with these pious warriors. Once battle has been joined, the Adepta Sororitas will stop at nothing until their enemies are utterly crushed.

Name: Adepta Sororitas, the Sisters of Battle, the Sisterhood, the Daughters of the Emperor

Gender: All Female (The Decree Passive maintains that the Ecclesiarchy cannot posses men under arms, with the Adepta Sororitas being allowed to exist due to the loophole in the decree’s wording)

Age: The youngest are in their 20s, the oldest can be hundreds of years old with rejuvenating treatments

Classification: All-female subdivision of the Adeptus Ministorum, Chamber Militant of the Ordo Hereticus of the Imperial Inquisition

Superhuman Physical Characteristics (Due to their Power armor), Enhanced Senses (Their helms likely include some form of Auspex in them much like Astartes helmets do), Weapon Mastery (Sisters are trained from a very young age to be exceptionally skilled in a wide variety of weaponry), Martial Arts (The Sisters are similarly skilled in a variety of hand-to-hand combat styles, owed to years of grueling training), Heat Manipulation (Via Meltas), Fire Manipulation (Via Flamers), Explosion Manipulation (Via Bolt rounds, and grenades), Durability Negation (Via Power weapons, which disrupt the bonds of matter with their power field, and to a lesser extent Chain weapons, which possess blades sharpened to a monomolecular edge), Limited Flight (Via Jump Packs), Vehicular Mastery (As part of their training, Sisters of Battle will almost certainly be taught to operate their transports as effectively as the best troops among the galaxy), Probability and Statistics Amplification (Via Acts of Faith), Resistance to Corruption, Telepathy, Soul Manipulation, Madness Manipulation, Possession (Due to their sheer, unshakable faith, indoctrination, mental defenses and perhaps even the psychic helping of the Emperor, Sisters of Battle are far less likely to be affected by the taint of Chaos than regular humans), Radiation Manipulation, Poison Manipulation, Heat Manipulation (Much like Astartes armor, fully enclosed Sororitas armor also probably provides a certain degree of environmental protection, albeit to a lesser extent)

All previous abilities, along with Plasma Manipulation (Has access to Combi-Plasma Guns and Plasma Pistols), Forcefield Creation (Canonesses may posses a Rosarius, an amulet that incorporates powerful force field generators)

Peak Human Physical Characteristics (Sisters Repentia are superbly trained warriors driven to the brink of sanity by battle rage, and as such display abilities far above those of ordinary humans, such as wielding massive Eviscerator Chainswords), Durability Negation (Eviscerators, much like regular Chainswords, possess monomolecular blades that can cut through nearly anything), Berserk Mode

Superhuman Physical Characteristics, Holy Manipulation (Due to the nature of possessing a portion of the Emperor's power), Flight, Immortality (At least Type 8), Resurrection (Of themselves and potentially even other people), Healing, Light Manipulation, Aura (The blessed aura of a Living Saint alone is usually enough to severely weaken the presence of the daemonic, as well as rouse forces loyal to them to dizzying heights of courage and hope), Teleportation via Dimensional Travel (Living Saints usually appear in the midst of the most hopeless battlefields, and being living constructs of Warp energy and the Emperor's will, they almost certainly use the Warp for the purposes of traveling), Extrasensory Perception (Being intrinsically tied to the Warp, Living Saints would almost certainly possess a connection to it similar to powerful psykers), Non-Physical Interaction (Living Saints can do battle with and defeat daemons both in realspace and the Warp), Resistance to Magic, Telepathy, Mind Manipulation, Empathic Manipulation, Soul Manipulation, Spatial Manipulation, Time Manipulation, Matter Manipulation, Reality Warping, Existence Erasure, Aura, Conceptual Manipulation, Corruption (Possessing of a portion of the Emperor's psychic power and being embodiments of his will, Living Saints are almost entirely unaffected by the powers of the daemonic, no matter how powerful they may be)

Attack Potency: Wall level to Building level with Power armor (Sororitas Power Armour at minimum can enhance a sister’s physical strength to levels far beyond that of any ordinary human. Strong Sisters of Battle are capable of harming each other in physical combat). Building level to Large Building level with weaponry (A sister’s Bolter, despite its decreased size, is no less effective and destructive than an Astartes’ own Bolter, reducing the enemy to a bloody pool. Flamers are capable of very quickly dissolving human flesh, muscle and bone into ash. Plasma weapons fire projectiles akin to a sun, and can also casually atomize large humanoids. Meltas are even more powerful than Plasma weaponry | At least Building level with Power armor (The strongest Sisters of Battle are capable of truly superhuman feats, such as defeating hordes of Orks despite being outnumbered 10 to 1, defeating Eldar Farseers and even holding their own against Grey Knights). Building level to Large Building level with weaponry (High-ranking Sororitas wield even better weaponry than their lesser sisters) | Street level physically, higher with Eviscerators (Eviscerators can tear through Terminator armor, although most of this comes from the durability negating properties of the blade's monomolecular edge) | Likely Large Building level (Penitent Engines are armed with Dreadnought-class close quarters weaponry, and are typically comparable to Astartes’ Dreadnoughts) | Varies, up to Solar System level (Living Saints can do battle with, and slay both Daemon Princes and Greater Daemons. However, the strength of said daemons is often variable. The strongest Living Saints, such as Celestine, can do battle with opponents on the level of the Warmaster)

Lifting Strength: Peak Human, at least Superhuman with Power armor (Can easily lift a grown man and hurl him 5 meters away with one hand) | Class 1 (Canoness Ludmilla could easily lift an armored Grey Knight of the ground and throw him several meters away) | Peak Human | Unknown | Unknown

Stamina: Peak human | At least peak human | Superhuman due to their combat frenzy | Superhuman (The pilots of Petinent Engines are overflown with all sorts of combat stimulants) | Varies

Intelligence: Above average (The Adepta Sororitas are generally selected from only the most exceptional individuals physically and mentally, typically going through years of strict education from childhood in the Schola Progenium, and are then taken to a convent and spend years as a Novice before finally joining the Sisterhood) | Above average (Canonesses are veteran warriors of the Sister of Battle, who rise to their position only through strong leadership, shrewd tactical genius and great combat skill) | At least average, though generally not applicable in combat (Sister Repentias are essentially brainwashed to lose all fear of death in combat and no remorse for the enemies of the Emperor, and to madly seek atonement for their sins through battle) | Below average (People strapped to Petinent Engines generally are flooded with chemicals to such a point that they can only engage in berserker melee combat, incapable of processing any higher forms of attacking) | At least gifted (Sororitas who become Living Saints were typically legendary Sisters in life)

Weaknesses: Sisters of Battle are unenhanced humans without their Power armor. Certain sisters are religious fanatics to the detriment of their common sense. Sisters Repentia are usually incapable of logical thinking in the midst of battle. Petinent Engines even less so.

Ranks of the Sisters of Battle: 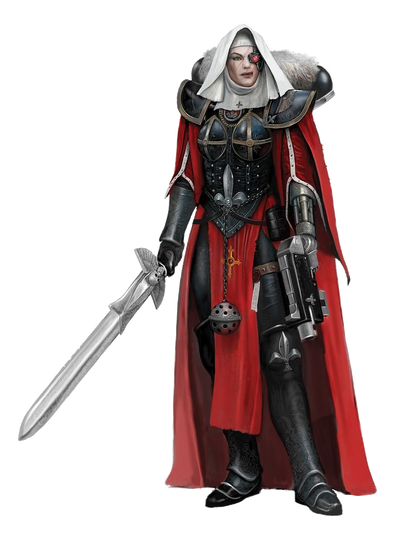 A Canoness is the overall commander of one of the Orders Militant, a shining example of purity and dedication of purpose. Each is a veteran warrior of many hundreds of battles who has risen to her position through a combination of strong leadership, shrewd tactical genius and sheer overarching faith in the Emperor. When the Ecclesiarchy sounds the call to arms, a Canoness boldly leads her warriors into the fray, refusing to take one step backwards whilst her enemies still draw breath. Under their command, the Sisters of Battle have crushed the foes of the Imperium across the galaxy.

Retrieved from "https://vsbattles.fandom.com/wiki/Adepta_Sororitas?oldid=7006595"
Community content is available under CC-BY-SA unless otherwise noted.