VS Battles Wiki
Register
Don't have an account?
Sign In
Advertisement
in: Characters, Final Fantasy, Protagonists,
and 25 more 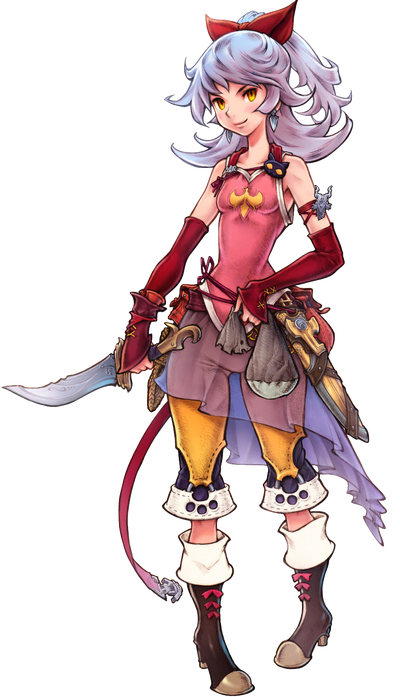 Commonly referred to by her moniker, "Adelle the Cat", Adelle is a wily and money-loving headhunter and thief who crosses Clan Gully several times before finally being caught before forcing her way into the clan to seek even more money. Always one to live in the moment, she is something of a hedonist and a loner by nature. This trait was later revealed to have resulted from the fact that she is one of the Gifted, a select group of people with extraordinary powers and the ability to remain youthful forever. As a result, she was the only survivor after her hometown succumbed to a plague, becoming self-centered in an attempt to keep others away from her after repeated bouts of misfortune. She is later captured and hypnotized to be forced against Clan Gully, only to be rescued by Luso's efforts to snap her back to her senses. From then on she became a loyal member of Clan Gully, later accepting and mastering her powers as a Gifted to better help her friends.

Origin: Final Fantasy Tactics: A2 Grimoire of the Rift

Age: Unknown, likely her mid to late teens, but her Agelessness makes this uncertain

Classification: Hume (Human), Thief (Default Class), Gifted, Can be any of the Hume jobs but is associated with the Thief and Heritor classes

Powers and Abilities: Superhuman Physical Characteristics, Non-Physical Interaction, Weapon Mastery, Energy Projection, Immunity to having one's own equipment stolen, Instinctively counters those who try to attack her, Limited Time Manipulation, Can charm her foes, Can inflict damage equal to the amount of damage she's taken, Regeneration (Mid-Low), Can sacrifice herself to revive all other party members, Immortality (Types 1 and 8; Will not age past her prime or die of natural causes, cannot be killed for as long as the Judge is present), Summoning via Accessories, Other abilities from other jobs and equipment include but are not limited to: Light Manipulation, Healing and Regeneration (Mid-Low) via White Magic, Monster Ability Copying, Death Manipulation, Illusion Creation, Elemental Manipulation, Teleportation

Speed: Sub-Relativistic (Can keep pace with Vaan and exceeds him in terms of movement speed and sheer speed stats)

Durability: Large Planet Level (Could hold her own against Luso and Vaan)

Standard Equipment: Varies depending on job, Known to have the Gigas Pendant, Earrings of the Dead, and the Pin of Order, which can summon Belias, Zalera, and Hashmal respectively.

Intelligence: Even before joining Clan Gully, Adelle had proven herself wily, manipulative, and perceptive, easily weaseling the most valuable loot out of a "collaboration" with Cid and Luso and made a name for herserlf as a successful, even infamous headhunter and thief. Her combat prowess only grows after coming to terms with her status as a Gifted, rapidly mastering the skills of all the Gifted before her and mastering a wide variety of weapons, ranging from rods, to knives, to katanas. However, she's somewhat money grubbing, and was easily tricked by Cid and Luso when lured by the promise of valuable loot.

Weaknesses: Adelle is somewhat money-grubbing, lacks magical power at the start of the battle, requiring her to hold out for a period of time to use magic and summon Scions, Equipment is restricted by current job

Note: Being from a tactical RPG, it's up to the OP to decide what equipment and abilities she should have, which should be specified at the start to prevent confusion.