VS Battles Wiki
Register
Don't have an account?
Sign In
Advertisement
in: Tier 10, Tier 10-C, Variable Tier,
and 67 more 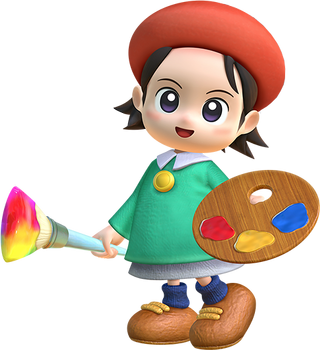 Adeleine, or Ado for short, is a character from the Kirby series. She is a gifted young human girl artist who came to Pop Star to study art.

She first appears as a boss, attacking Kirby by painting various old bosses to attack him. She later befriended Kirby and assists him on his adventures by painting him a 1UP, various food and hints for some puzzles that should obtain Kirby a Crystal Shard.

Age: Unknown (At least young) | Around or over 1000 years old, despite still being young

Longevity, Non-Physical Interaction (Can affect Void Soul [Shown Post-Star Allies]), Small Size (Type 1. A little more than twice as tall as Kirby, whose 20 cm/8 inches tall, Self-Sustenance (Type 1), Toon Force, Elasticity (Can survive being flattened and immediately restore her shape), Regeneration (Low-Mid. Instantly recovers from being impaled by allies or by Flamberge's Barbecue Party, if mildly harmed by the latter), Immortality (Type 3), Weapon Mastery (Via her paintbrush), Paint Manipulation, Subjective Reality, Life Manipulation & Creation (Has the ability to turn anything that she paints real or bring those things to life), Limited Deconstruction (Can send bolts to drop entire rows of blocks in whatever direction she's facing), Resistance to Mind Manipulation, Morality Manipulation & Madness Manipulation (Unaffected in the areas where Dark Matter has their mind-controlling clouds. Still vulnerable to their possession)

As before, Superhuman Physical Characteristics, Acrobatics (Can instantly make leaps of around a meter), Dimensional Storage (Star Allies collected the Hear Spears into themselves), 4th Wall Awareness (When going into a door using the Friend Star the one in the last place always salutes the audience), Accelerated Development (Through battle and while assisted with at least 1 partner, their power can permanently increase if their bond of friendship/companionship gets stronger/deeper), Vehicular Mastery, Flight (By being carried by Ribbon), Creation (Able to help other Star Allies create Friend Stars), Can turn into a small ball of intangible energy, Magic, Resurrection (Able to revive others via Revival Spell), Empathic Manipulation & Morality Manipulation (Can turn enemies into allies with Friend Hearts, being able to affect two foes at once with one Friend Heart, and a charged one changing three foes who resisted this effects), Healing, Purification (Friend Hearts can be used to heal and purify others. Can "Revive" defeated allies, who are merely unconscious), Cloth Manipulation, Power Bestowal (Turning targets into allies via Friend Hearts gives them that same power), Telekinesis (She and Ribbon can attract objects via Fairy Dance), Energy Projection (With Ribbon's Crystal Gun), Resistance to Transmutation (Any Star Ally can be cooked inside Chef Kawasaki or Cook Kirby's pot together with enemies as they're turned into food, safely coming out briefly dizzy), Empathic Manipulation & Morality Manipulation (Unaffected by the presence of the individual Jamba Heart pieces), heat, cold, Fire Manipulation, Ice Manipulation (Unaffected by the temperatures of Blizzno Moon and Star Lavadom. Can survive harmed being hit by fire and ice attacks in the same way that Kirby, Meta Knight, King Dedede and Bandana Waddle Dee do, who can survive in the same way being hit by a Master Crown-controlled Magolor's own versions of Kirby's Super Abilities, when Kirby could quickly burn a car-sized creature into black goo that was reduced to nothing and freeze & shatter a miniature active volcano. Can survive harmed being hit by fire and ice attacks from Kirby, elements with which he can harm Pyribbit, who baths in molten lava, moistens his throat drinking lava, and fills his stomach eating lava rocks), Gravity Manipulation (Can outrun, outlfy and survive harmed getting sucked into a Black Hole from Marx, and survive harmed black holes from Magolor in the same way Kirby, Meta Knight, King Dedede and Bandana Dee do, who can survive a black hole that was warping & sucking all the space of the shown battlefield, including stars in the background of it)

Her creations have or allow her to have the following powers: Superhuman Physical Characteristics, Inorganic Physiology (Type 1. Some of her creations are real, others explode as paint when they die and lack depth in their bodies, which they are unaffected by), Healing (Via various food items she can create & eat with allies), Regeneration (High-Low) & Natural Weaponry (Can create Dark Matter that can attack by using the petal-like extremities of their bodies as projectiles, and quickly regrow them), Ice Manipulation, Electricity Manipulation, Martial Arts, Smoke Manipulation, Air Manipulation, Flight (By being carried by one of them, others fly when fighting targets), Power Bestowal (Ice & Electricity Manipulation)

As before, Healing (With various food items, Health Power-Up Hearts, which heals all vitality), Statistics Amplification (With Power-Up Hearts, which increase strength, health or speed of all allies at once), Invulnerability with Invincibility Candy, Summoning (Can summon Helpers by directly throwing Friend Hearts to Copy Essences. Can summon a Dream Friend using the Dream Rod), Homing Attack (With Star Allies Sparkler)

Attack Potency: Below Average Human physically (Can only slightly harm Kirby while getting knocked out herself. Presumably as weak as a regular, young human), Varies up to Multi-Continent level via Subjective Reality (Anything she paints becomes real, including inanimate objects and minor enemies that should be comparable to Waddle Dees in strength, as the real versions of them can harm Waddle Dees. The strongest beings she paints can put up somewhat of a fight against Pre-Canvas Curse Kirby) | Continent level physically (Can harm and defeat minor enemies such as Knuckle Joes, and stronger beings such as mini-bosses. This also includes beings on the same level as Void Termina, but the damage Adeleine generates is rather low and she was stated to not be as powerful as her paintings/not being confident in her physical strength, unlike her drawing abilities), Varies up to Galaxy level, likely Low Multiverse level via Subjective Reality (With her paintings having gotten even better, her creations can be used to assist Kirby & two fellow Star Allies in the defeat of Void Termina, Corrupt Hyness, the retaliators Three Mage-Sisters [at once], Morpho Knight EX and the stronger incarnations of Void Termina), can ignore durability with Friend Hearts

Speed: Massively FTL+ (Can keep up with fellow Star Allies such as Kirby, Meta Knight, King Dedede, Bandana Waddle Dee, Gooey, Ribbon and the Three Mage-Sisters, and they are comparable to Morpho Knight and Void Termina, with whom they can fight. The attack speed of her Crystal Gun should be comparable to an incomplete Cystal, which repeatedly flew from planet to planet in short periods of time. Along with other Star Allies, she can chase and keep up with the Jamba Hearts several times, which were suddenly scattered across the universe)

Durability: Below Average Human level (Kirby can defeat her with any attack, gets knocked out herself if she succeeds in hitting Kirby. Presumably as durable as a regular, young human), up to Multi-Continent level for her paintings | At least Continent level, likely Galaxy level to Low Multiverse level physically (Can survive attacks from Void Termina, Corrupt Hyness, the Retaliator Three Mage-Sisters, Morpho Knight EX and the stronger incarnations of Void Termina, but Adeleine has the lowest health out of all the most powerful Star Allies. Official artwork shows her unconcerned while around an electric attack from the retaliator Zan Partizanne), up to Galaxy level, likely Low Multiverse level for her paintings

Stamina: Low (Gets defeated after attacking Kirby, when the latter doesn't attack her) | Very high (Is on par with Kirby)

Standard Equipment: Her Paintbrush, canvas | As before, Ribbon and a Crystal Gun. A floaty

Intelligence: Below average | As before with vast combat skills (Able to contend with, and defeat, Hyness and Void Termina)

Weaknesses: Is very hesitant and naive

Note that there is no distinction between her keys in this section yet.

When collected, Adeleine becomes invincible for a short time, and almost any enemy she touches will be instantly defeated, or at least damaged.

The Final Weapon in Star Allies, used to take out Void Termina. The Star Allies Sparkler fires projectiles from the tip, fly around quickly and efficiently, and spin counterclockwise to avoid all damage on a relative scale (Sparkler Turn). Kirby canonically took the lead in the center of the Sparkler while his friends rode in the tail. Still, the leader can be rotated to imbue the shots with a different element depending on the leader (the technique is called Rider Switch). The Sparkler can fire different homing projectiles with varying power depending on charge time. An uncharged shot is called the Sparkler Comet, and it fires a star-shaped projectile. A charged shot is called the Sparkler Starshot, and it fires a projectile shaped like two intertwining stars. The strongest attack is called Team Star Allies!, which, if everyone who's riding charges together and releases at the same time, fires a giant laser at the opponent. Adeleine uses this item on her own when used in The Ultimate Choice of Star Allies.

Note: Whether or not Adeleine and Ado are the same character is left intentionally unclear and unknown.

Artwork with Kirby & co. against the Three Mage-Sisters