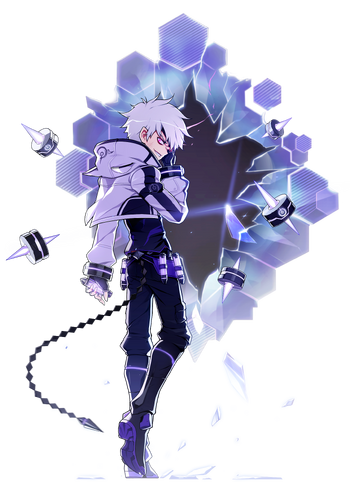 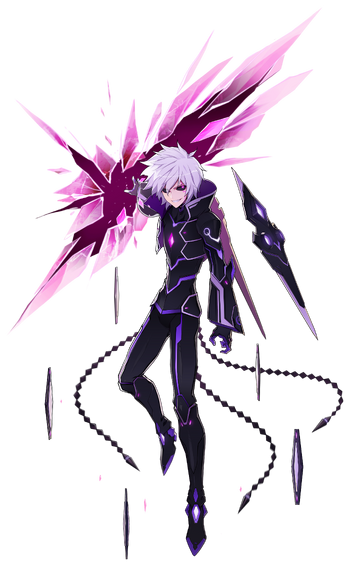 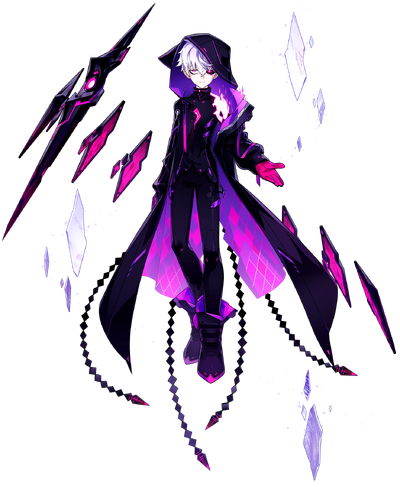 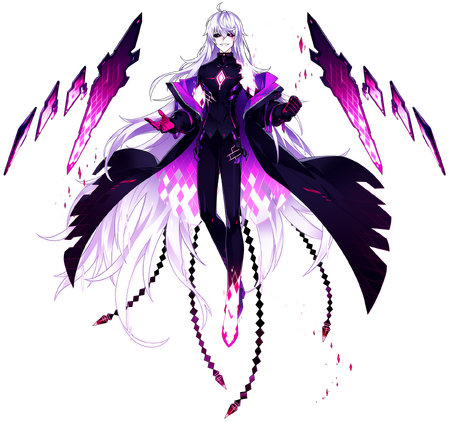 Add is a descendant of Nasod researchers, who were slain for studying the forbidden secrets of the Nasod race. After escaping a life of slavery, he fell into an ancient library containing vast unknown knowledge, in which he was trapped for years. Years of isolation drove him mad, though in inventing the Nasod Dynamo, his primary weapon, he escapes the collapsing library and finds himself far into the future - unable to return to his past life.

The Mad Paradox path follows his further descent into madness as he desperately seeks a method to return back to the time period in which he knew happiness, studying and manipulating the laws of time and space in order to find the timeline in which he originated as a child.

Genius Intelligence, Superhuman Physical Characteristics (Add's perpetually-active Nasod Armor enhances his physical abilities to superhuman levels), Forcefield Creation (Add's Nasod Armor projects a protective layer around his body), Non-Physical Interaction (Add can damage ghosts and other spirits), Flight (Add can ride his Nasod Dynamos to fly through the air, and he can levitate during Dynamo Configuration Mode), Awakened Power (with Dynamo Configuration Mode, Add's power is increased by 20%, he gains increased ease of control over his powers, and his abilities can utilize his alternative Dynamo energy source), Electricity and Energy Manipulation (Add can freely utilze Nasod energy as his main form of attack), Matter Manipulation (Add can freely control elementary particles, such as electrons to generate electricity, neutrons to create low-yield nuclear explosion, and allowing him to easily replicate the functions of a particle accelerator, which he uses to attack), Durability Negation (Add can bypass conventional durability with spatial attacks), Spatial Manipulation (Add can create spatial fields that cannot be passed through, as well as cracks in space to damage his enemies and perform various actions, such as pulling enemies towards himself or accelerating space in an area to increase his speed), BFR and Teleportation (Add can forcibly teleport his enemies anywhere he desires), Portal Creation (Add can rapidly create portals to warp himself or his enemies to various locations, such as with Reverse Circle), Immortality (Type 4) and Time Manipulation (Add can freely control his personal time, allowing him to speed up his actions relative to everyone around him, speed up his recovery rate, and even restore himself to a "save state" in time at any given point, even after death), Gravity Manipulation (Add can create giant Gravity Spheres that crush enemies caught within them), Limited Dimensional Travel and Explosion Manipulation (Add can open a dimensional gate to warp explosive dark matter over a wide area). Resistance to Poison Manipulation (Add is largely unaffected by an unknown poison that he was afflicted with during his travels across time and space), and Space-Time Manipulation (can tank his own attacks).

All previous abilities to a far greater extent. Enhanced Dimensional Travel and Time Travel (as Diabolic Esper, Add can freely travel across time and space), Homing Attack (with Maximum Strike, which fires homing temporal blades at Add's enemies), Mind Manipulation (Add can directly attack an enemy's mind with Psionic Shock and Mind Break, or just destroy it completely with Moonlight Rhapsody), Statistics Reduction and Invulnerability Pierce (with Mind Break, which ignores invulnerability status and reduces the magical power of all targets struck), additional Spatial Manipulation (Add's Void Field restrains all enemies within an area around him using spatial manipulation while damaging them for a limited time), Status Effect Inducement (minds that are not immediately destroyed by Moonlight Rhapsody are inflicted with a stacking debuff for every wave of Moonlight Rhapsody they are struck by, and this debuff will cause a mental explosion that deals additional damage far greater than the initial activation of Moonlight Rhapsody in direct proportion to the number of stacks inflicted), Enhanced Gravity Manipulation (Add immobilizes and crushes a large area in an ultra-high gravity field, before instantly inversing its direction to rip apart everything trapped inside), additional Time Manipulation (with Reverse Stigma, Add records the current location of a single opponent, before freely resetting them to that location at a later point in time), Energy Absorption (Add drains energy from a single enemy with Force Finger), Statistics Amplification (with E.S.P.), Illusion Creation (with Paranoia, Add inflicts illusions real enough to physically affect his opponents, making them believe they are either on fire, drowning, or are poisoned). Resistance to Mind Manipulation (with Mind Control, which automatically reduces the potency of mental effects on Add).

All previous abilities to a far greater extent. Abstract Existence (Type 2. Add is no longer a physical being, and is equivalent to the essence of time and space itself), Omnipresence (Mad Paradox is one with space-time, described as being stuck in endless contradictions across time and space, and being a paradoxical existence that is both one with time and wanders aimlessly across it), Statistics Amplification (speed boost with Hyper Acceleration), Summoning and Statistics Reduction (with Haunting Spirit, which summons and fires an evil spirit that reduces the enemy target's speed by over half), Enhanced Awakened Power and Transformation (with Acute Senses, which transforms Add into Mad Paradox's true form upon entering Dynamo Configuration Mode, increasing his dynamo-based attack power on top of the base increase in his strength) and Damage Boost (with Side Effect, which increases Mad Paradox's damage every time an enemy is struck by one of his special attacks).

Attack Potency: At least Town level (One of Add's most basic abilities is "Neutron Bomb", which uses his ability to manipulate neutrons to create a neutron burst, a low-yield thermonuclear explosion, and as Time Tracer, he possesses far more powerful abilities). Ignores durability with spatial manipulation | At least Multi-Solar System level (At least comparable to Elsword, who can defeat Solace, who can create a pocket reality containing a black sun and numerous stars), possibly far higher (Diabolic Esper is stated to have the power to distort time and space on a fundamental level and cause the end of the world) | At least Multiverse level, possibly Multiverse level+ (Mad Paradox is a being fundamentally fused with and is capable of destroying all of time and space. All of time and space contains countless to possibly infinite parallel worlds as two of Add's most intelligent paths - being Mad Paradox and Dominator, both of which being supergeniuses - both attempted to calculate a way to locate the coordinates of his original world, and both came to the conclusion that it was impossible for him to ever find the exact parallel world that he originated from as he would always inevitably end up in a new one every time he tries).

Speed: Massively Hypersonic+ (Can react to and dodge cloud-to-ground lightning and fight others capable of doing the same) | Massively Hypersonic+ (far faster than before) | Omnipresent with Immeasurable reaction and combat speed (As Mad Paradox, Add is one with all of time and space, his consciousness existing independently from the natural flow of time).

Durability: At least Town level (Add can tank blows from enemies as strong as Teach the Tyrant and Amethyst, who are far superior to enemies capaple of tanking Add's Neutron Bomb) | At least Multi-Solar System level (Add is comparable to Elsword and Raven, who can tank blows from Solace) | At least Multiverse level, possibly Multiverse level+ (Mad Paradox is one with all of time and space, which contains countless to possibly infinite parallel worlds).

Stamina: Very High as Time Tracer and Diabolic Esper. Can fight prolonged battles deep into the depths of various dungeons containing enemies comparable to himself in strength. Likely Infinite as Mad Paradox, as he loses all physical limits due to becoming a non-physical entity tied to the foundation of time and space.

Range: Hundreds of Meters normally, as his energy attacks should have superior range to missiles and anti-aircraft weaponry. Universal+ with time-space abilities. | Same as before | At least Multiversal, possibly Multiversal+ due to being one with all of space and time.

Intelligence: Supergenius. Add is often displayed as the greatest genius in Elios. Even as a child, Add was able to single-handedly invent the Nasod Dynamo despite being barely a preteen with incomplete education and coming form a life of slavery; and despite losing access to the Ancient Library at the beginning of the story, in only a few years, he was able to improve his technology to a point that his personal Nasod tech became capable of manipulating space-time to such a fundamental level that it allowed him to fuse his very being with the essence of time and space itself, where even far before this level was reached, he was already capable of bending time and space to his whims using only his personal technology.