VS Battles Wiki
Register
Don't have an account?
Sign In
Advertisement
in: Tier 7, Tier 7-C, Tier 4,
and 21 more 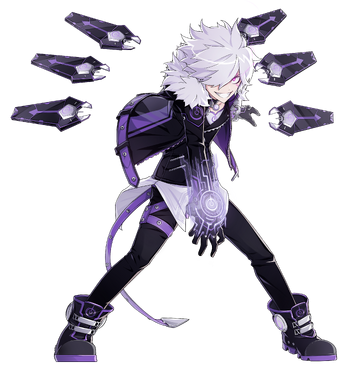 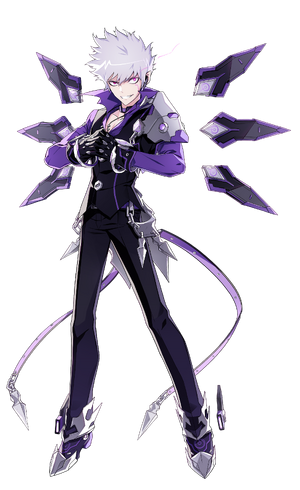 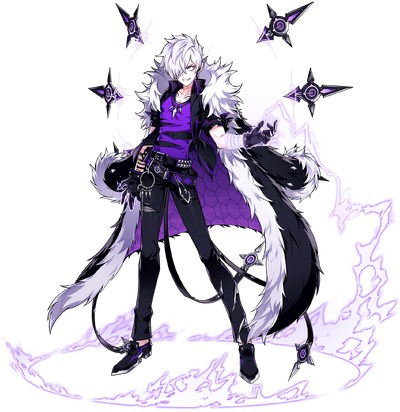 Add is a descendant of Nasod researchers, who were slain for studying the forbidden secrets of the Nasod race. After escaping a life of slavery, he fell into an ancient library containing vast unknown knowledge, in which he was trapped for years. Years of isolation drove him mad, though in inventing the Nasod Dynamo, his primary weapon, he escapes the collapsing library and finds himself far into the future - unable to return to his past life.

The Doom Bringer path follows his pursuit of furthering the Nasod Armor technology to fulfill his obsession for unparalleled and absolute power that would ensure victory in every possible situation.

Genius Intelligence, Superhuman Physical Characteristics (Add's perpetually-active Nasod Armor enhances his physical abilities to superhuman levels), Martial Arts (as Psychic Tracer, Add is proficient in hand-to-hand combat), Forcefield Creation (Add's Nasod Armor projects a protective layer around his body), Non-Physical Interaction (Add can damage ghosts and other spirits), Flight (Add can ride his Nasod Dynamos to fly through the air, and he can levitate during Dynamo Configuration Mode), Awakened Power (with Dynamo Configuration Mode, Add's power is increased by 20%, he gains increased ease of control over his powers, and his abilities can utilize his alternative Dynamo energy source), Electricity and Energy Manipulation (Add can freely manipulate electrons to generate electricity for his standard attacks), Matter Manipulation (Add can freely control elementary particles, such as electrons to generate electricity and neutrons to create a low-yield nuclear explosions, allowing him to easily replicate the functions of a particle accelerator and even control dark matter, which he uses to attack), Durability Negation (Add can bypass conventional durability with particle manipulation), Transformation, Intangibility and Teleportation (Add can rapidly dodge wide-area attacks and teleport himself short distances by transforming into quantum particles), Shockwave Creation (with Quake Buster, which fires an energy pulse into the ground to create a series of quakes), Homing Attack (with Pulse Cannon, which fires a series of homing particle shots), Explosion Manipulation (with several attacks, including Sonic Jump, which can release countless nanomachines that explode over a wide area through a chain reaction), Technological Manipulation (with Dynamos and several drones, such as with Particle Storm and Magnetron). Resistance to Corruption (Should have similar resistances as Time Tracer, who is largely unaffected by Henir's corruption, which he was afflicted with during his travels across time and space) and Electricity Manipulation (can tank his own attacks).

All previous abilities to a far greater extent. Plasma Manipulation (Add can fire plasma lasers in a fan-shape in front of him as well as concentrate it for a massive explosion with Doomsday), Enhanced Awakened Power (with Body of Transcendence, which further increases Add's attack power and recovery speed while in Dynamo Configuration Mode, Nasod Armor Mode - Full Burst, which further increases the attack power of Add's special attacks as well as increasing the activation frequency of Particle Storm, and Awakened Will, which increases the power of all abilities related to Dynamo Configuration Mode), Empowerment (with Output Exchange, which automatically increases Add's attack power when enough Dynamo Energy is stockpiled), additional Teleportation (with Fantasy Tracer, which allows Add to instantly teleport to any enemy struck by one of his particles), Magnetism Manipulation and limited Power Nullification (can generate electromagnetic beams with Pylons, fire railgun shots, as well as fire an EMP that affects both technology as well as magical energy, temporarily disabling both), additional Homing Attack (with Psionic Beat, which fires 3 thin blasts of energy that instantly bounce to the nearest additional targets, and several other attacks, such as the far more powerful "Conqueror"), Statistics Reduction (with Energy Shock, which cuts the speed of every enemy it hits), limited Air Manipulation (with Psychic Storm, which sucks in all nearby enemies to shred them in a vortex of plasma), Statistics Amplification (with Quicksilver Accel, which greatly amplifies Add's speed), Resistance Negation and Durability Negation (with Amplify Energy, which allows all of Add's Nasod Armor attacks to ignore enemy defensive effects, and Supersonic, which is a high-speed series of attacks that deal a fixed damage equivalent to 4% of the target's max HP, with the final blow ignoring all defenses entirely). Enhanced Resistance to Corruption (as a member of the El Search Party, Add has been to the depths of Henir and was completely unaffected by its corruption).

All previous abilities to a far greater extent. Additional Empowerment (with Blood Boil, which passively increases the power of all direct attacks, as well as increasing Add's overall physical abilities by overloading the energy circuits within his body, which is triggered by all of his active skills), enhanced Plasma Manipulation (when attacking with close quarters skills such as Psion Rush and Supersonic, Add's plasma is enhanced to deal even greater damage) and Duplication (with Symmetric Identity, which creates a plasma clone of the same strength and abilities as Add to perform perfectly-coordinated attacks on all enemies). Resistance to Physics Manipulation (fusing with the Nasod Armor is said to have allowed Add to ignore the laws of physics entirely).

Attack Potency: At least Town level (One of Add's most basic abilities is "Neutron Bomb", which uses his ability to manipulate neutrons to create a neutron burst, a low-yield thermonuclear explosion, and as Psychic Tracer, he possesses far more powerful abilities) | Multi-Solar System level (Lunatic Psyker is comparable to Knight Emperor, who defeated Solace, a being that created a pocket reality containing a black sun and numerous stars) | At least Multi-Solar System level, possibly higher (Far stronger than before).

Durability: At least Town Class (Add can tank blows from enemies as strong as Teach the Tyrant and Amethyst, who are far superior to enemies capaple of tanking Add's Neutron Bomb) | Multi-Solar System level (Add is comparable to Elsword and Raven, who can tank blows from Solace) | At least Multi-Solar System level, possibly higher (far stronger than before).

Stamina: Very High. Can fight prolonged battles deep into the depths of various dungeons containing enemies comparable to himself in strength. | Extremely High, possibly Infinite as Doom Bringer. Having fused with the Nasod Armor, he is said to have overcome human limitations and surpassed the need for resources and tools.

Intelligence: Supergenius. Add is often displayed as the greatest genius in Elrios. Even as a child, Add was able to single-handedly invent the Nasod Dynamo despite being barely a preteen with incomplete education and coming from a life of slavery. Comparable in intelligence to his other paths, such as Mad Paradox.