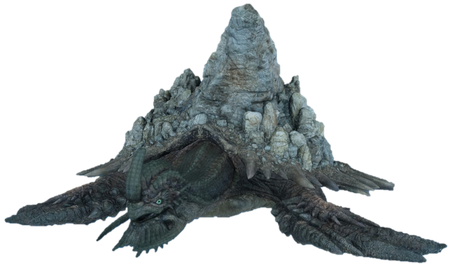 The Adamantoise is a superboss in Final Fantasy XV. Technically, it is encountered several times in the story, just unbeknownst to the four heroes, and only in passing. However, after taking a quest (Let Sleeping Mountains Lie) from Cindy, it is revealed that the mountain in Longwythe Peak is actually the Adamantoise, and the party is forced to flee from it. It can later be challenged by accepting the Lonely Rumblings hunt from Takka.

Lifting Strength: At least Class T due to virtue of size

Striking Strength: At least Country Class, possibly Multi-Continent Class (Simply moving is enough to do major damage to the party)

Durability: At least Country level, possibly Multi-Continent level (Can take constant punishment by all four heroes at once and not even flinch. Their strongest attacks do only chip damage)

Stamina: Very high (Takes canonical days to fight, and is fought straight through.)

Weaknesses: Its neck and eye are more vulnerable than its legs.