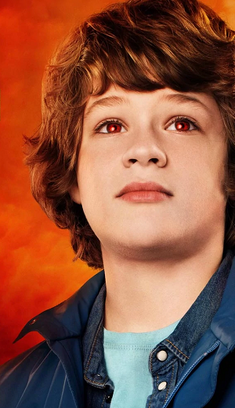 Adam is the true Son of Satan, who was misplaced at birth thanks to a mix-up by the demon Crowley and the Chattering Nuns of St Beryls. Instead of being raised by the American Dowling Family, he was given to the Young Family and raised in Tadfield. Even before he was able to come into his true powers, Adam could influence the weather in Tadfield to make it exactly perfect for each time of year. He befriended Pepper, Brian, and Wensleydale, who called themselves 'the Them', and made Adam their leader as he had the biggest imagination, creating the best games.

Tier: 10-C physically, at least 5-B, potentially Low 2-C with his powers

Name: Adam Young, The Adversary, Destroyer of Kings, Angel of the Bottomless Pit, Great Beast that is called Dragon, Prince of This World, Father of Lies, Spawn of Satan, Antichrist, and Lord of Darkness

Powers and Abilities: Reality Warping, Creation (Everything Adam believes in, such as aliens or Atlantis, becomes true if he wants to. Created a new body for Aziraphale), Weather Manipulation (Caused various catastrophes across the Earth and later dispelled them with a thought), Biological Manipulation (Forbid his friends to leave the forest, made their mouth disappear and forced them to smile when they started crying), Plant Manipulation (Withered a bush to allow Dog to escape), Time Manipulation (Altered time when he stated that Satan wasn't his real father), Transmutation (Turned a nuclear reactor into a sherbet sweet), Summoning (Summoned the Kraken, called upon the Horsemen of the Apocalypse after they arrived on Earth), Telepathy (Was able to mentally communicate with the Horsemen), Willpower Manipulation (Strengthened his friends' will so they could fight the Horsemen), Enhanced Senses (Sensed the Horsemen of the Apocalypse when they arrived on Earth and knew where they were located), Flight, Teleportation, likely many others

Attack Potency: Below Average Human level physically, at least Planet level (Can at least destroy the Earth with a thought. He was able to cause catastrophic events across the world and later dispelled them with ease), potentially Universe level+ (Would have likely been able to affect the Universe. Overpowered Satan, though he was stated to be too strong to be directly fought as Adam had to use a great extent of his powers to defeat him. He rebooted reality, changing the timeline.)

Durability: Below Average Human level (Though he would be able to amp his durability with his powers)

Intelligence: Gifted. Is capable of learning information very quickly and easily understood the consequences of mankind over the environment.

Weaknesses: Can use some of his powers without even knowing it. Can lose control over himself and be corrupted. Lost most of his abilities after he said Satan wasn't his father.