VS Battles Wiki
Register
Don't have an account?
Sign In
Advertisement
in: Tier 9, Tier 9-B, Characters,
and 22 more 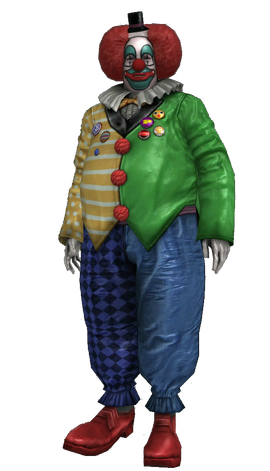 Adam MacIntyre once was a popular clown before the zombie outbreak. He went mad after they ate his audience.

Speed: Subsonic combat speed and reactions (Can deflect gunfire while fighting with Frank)

Range: Extended melee range with his chainsaws, several meters with his fire breath and throwing knives

Intelligence: Average. While not displaying many signs of intelligence, Adam is smart enough to use the noise of the roller coaster ride to keep zombies at bay. He's also a competent fighter

Weaknesses: Mentally unstable. Tampering with the ride is a quick way to anger him. His balloons can backfire at him