VS Battles Wiki
Register
Don't have an account?
Sign In
Advertisement
in: Tier 9, Tier 9-B, Tier 9-A,
and 41 more

Adam Jensen is a primary character in the Deus Ex video game series. He is a young adult turned cyborg. Adam was biologically and mentally gifted from birth, Born in the year March 9, 1993. He was an experimented child subject of White Helix Labs, and later underwent advanced augmentation from Serif Industries, his employer, after an attack on their building's lab department, Adam as a human was on the verge of death when a mysterious organization attacked the headquarters kidnapping top scientist Megan reed and his team and almost killing Adam with dangerous weaponry however he was saved by Sarif Industries by making him a part cyborg giving him various augmentations, abilities and weaponry now with tons of powers and abilites installed Jesen used them throughout his journey to take down mass evil organizations across the world and solving murder crimes to find out whom he was attacked by that day, Rescuing Megan Reed's team and uncovering the truth.

Following the events of Deus Ex: Human Revolution, Adam had been made aware of greater mechanical enhancements and given new powers to use in the following game Deus Ex: Mankind Divided. He has access to higher end upgrades and augments that greatly improve his versatility.

Powers and Abilities: Superhuman Physical Characteristics, Cyborgization (Partial), Hacking, Shield Generation (augmented armor, drains his cells greatly), Expert Martial Artist, Expert Marksman, Limited Transformation (can adjust the shape of his hands for an improved grip), Limited Homing Attack (With Target-Seeking System upgrade to combat rifle and machine pistol and Heat Targeting System upgrade for the rocket launcher), Regeneration (Low, fast-acting), Invisibility (Near-perfect. However, it drains his energy cells within several seconds), Expert of stealth and infiltration, Can see enemies through walls, Limited Statistics Amplification (With Focus Enhancement augmentation he can perceive his surroundings in slow motion), Information Analysis (his HUD provides information on enemy's weaponry and injuries, alongside their medical history), Social Influencing (A highly persuasive smooth talker on his own, further reinforced by his Social Enhancer augmentation which allows him to release a cocktail of pheromones capable of swaying a conversation towards the desired goal), Explosion Manipulation (With explosive rounds to revolver, grenades, rockets, nanoblades and Typhoon System), Smoke Manipulation (With smoke grenades), Technology Manipulation (with EMP ammunition and grenades, his Chaff augmentation allows him to delay the explosion timer in nearby grenades, mines and other explosive devices), Electricity Manipulation with TESLA (Can stun enemies), Sleep Manipulation (with Tranqulizer Rifle), Status Effect Inducement (With his Typhoon, TESLA and P.E.P.S. augmentations, Stun Gun, flashbang and gas grenades). Resistance to poisons (with Implanted Rebreather augmentation), flashbangs (His Flash Supressant augmentation protects him from being blinded by harsh light), Technology Manipulation (His EMP Shielding augmentation protects him from the effects of EMP grenades).

Attack Potency: At least Wall level (Compared to others, he is one of the strongest and most advanced mechanically augmented characters in the series, and is capable of punching through walls, however this requires an energy cell for use), possibly Small Building level (His Typhoon augmentation is incredibly powerful and can cause a massive amount of damage in a small space)

Speed: Superhuman, possibly Su​bsonic with Supersonic Reactions (Extremely fast reflexes, has an augment that sends him dashing forward, has reacted to bullets twice), higher with Focus Enhancment (can perceive his surroundings in slow motion)

Lifting Strength: Unknown, at least Peak Human (He can lift and toss dumpsters and vending machines at enemies)

Durability: Wall level (Can withstand bullet fire and other extremely strong aug's attacks), at most Small Building level (His augmented armor can withstand absurdly great amounts of bullets, and other types of damage for a short period of time), higher with TITAN (his TITAN augmentation grants him a temporary protection against all physical damage, except EMP ammo)

Stamina: His augmentations allow him to sprint and run faster for long periods of time, as well as fight other superhuman cyborgs for several minutes

Range: 1–2 meters physically, 5 meters diameter with the Typhoon, 50–300 meters with most of his firearms (based on real life guns such as 9mm handguns and sniper rifles)

Intelligence: Gifted. He is an experienced fighter, and attended 3 universities and obtained Criminal Justice degrees. (Adam is a part human part cyborg and an expert hacker and stealth master. Jensen is not only a master in direct confrontation, but he also knows how to sneak into highly-secured facilities. Many times has he done so without being noticed and was even able to sneak into the morgue of a police station, as well as into the office of the Head of Tarvos Security in Prague. Jensen himself said that Tarvos is "the best private security company in the world". Adam's ex-boss, Sarif admits that he's a natural when it comes to detective work. This proves to be true when Jensen solves multiple mysterious throughout the Human Revolution game and later on solved the mystery of the Růžička Station bombing and was able to hacked into global top secret military FEMA organization and single handely defeated their military expert bosse being undetected by camera every corner and bypassing the heavy security guards, Jensen can hack into every single top military tech he came across with and gain access into their base and compunds and uploading viruses to breach firewall of enemy organization's internet and shutting down their cameras.)

Weaknesses: His augmentations are capable of being abused, for example, his enhancements were hijacked during the events of Deus Ex: Human Revolution

Notable Attacks/Techniques: Adam Jensen being a part cyborg he has various enhancements, powers, weapory installed on each part of his body which he uses in combat that are mentioned below. 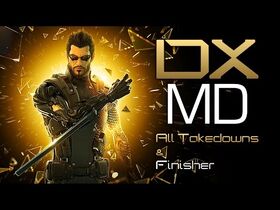 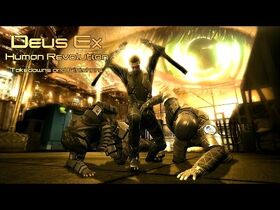 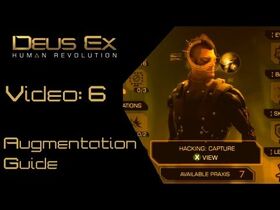 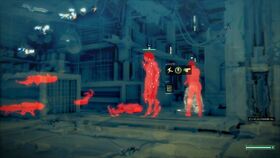 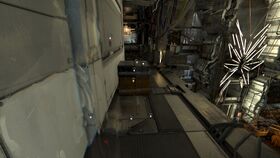 Adam punches through a wall