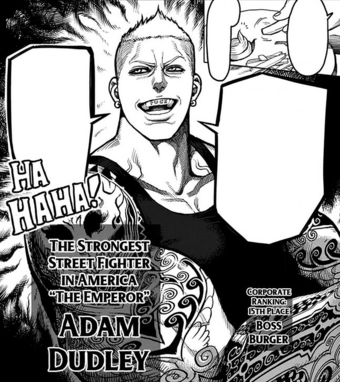 Adam Dudley, also known as The Emperor, is an American street fighter who represented Boss Burger during the Kengan Annihilation Tournament. After the tournament, he stayed in Japan, becoming an affiliated fighter within the Kengan matches. Adam's personality becomes readily apparent in his first appearance. He is very vulgar in the way he speaks, typically throwing profanity into nearly every sentence that leaves his mouth.

Speed: Hypersonic (Managed to react to Cosmo's attacks which managed to hit Akoya)

Lifting Strength: Peak Human (Should be comparable to the likes of Haruo)

Durability: Building level (Took hits from Imai and easily managed to get from it)

Stamina: Very high. Was able to fight after he was bleeding by the blade of Long Min and get beatdown from Imai.

Intelligence: Average. He is an expert at street fighting and hockey. He knows how to take advantage of his incredible trunk muscles, able to punch at very irregular angles using it.

Retrieved from "https://vsbattles.fandom.com/wiki/Adam_Dudley?oldid=7030846"
Community content is available under CC-BY-SA unless otherwise noted.