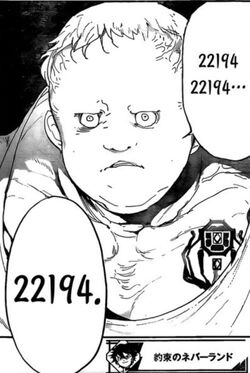 Adam (アダム Adamu) is the gatekeeper of the Goldy Pond Resistance and the strongest member of the group. He escaped from a Factory Farm, a place where human kids are raised exclusively to be food for demons.

Attack Potency: At least Small Building level (Destroyed a small part of a house, is able to damage Lewis).

Speed: At least Supersonic+ (Able to keep up with Lewis)

Lifting Strength: Likely Class 5 (Lifted and threw a small part of a house with ease)

Intelligence: Unknown (He was raised in a factory farm so he wasn't educated properly, however he has shown to understand the meaning of various words and has a good memory)

Retrieved from "https://vsbattles.fandom.com/wiki/Adam_(The_Promised_Neverland)?oldid=4105829"
Community content is available under CC-BY-SA unless otherwise noted.