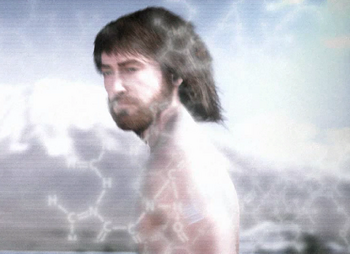 Adam was a hybrid leader of the human rebellion against the Isu during the Human-Isu War. Conceived in order to preserve the DNA of the technologically advanced beings, Adam and Eve turned against their masters and chose to fight for humanity's free will. He is considered one of the first proto-Assassins, alongside Eve. In addition, Adam is a distant ancestor to both Clay Kaczmarek and Desmond Miles.

In 75,010 BCE, Adam and Eve, another hybrid, rebelled against their creators. As hybrids, the two were biologically immune to the effects of the Pieces of Eden on their brains, lacking the neurotransmitters upon which the Pieces of Eden acted and that would have compelled them to obey.

Stealing one of the First Civilization's "Apples of Eden", Adam and Eve attempted to escape Eden through the use of their skills, but they were suddenly stopped by an unknown force.

Adam and Eve were the parents of Cain and Abel, the former of which would go on to kill his younger brother in order to acquire his Apple of Eden and become the founder of the order that would come to be known as the Knights Templar.

Tier: At least 9-A, higher with melee weapons, firearms, Pieces of Eden and even higher with prep

Classification: Human-Isu Hybrid, Proto-Assassin, Leader of the Human Rebellion against the Isu

Superhuman Physical Characteristics, Enhanced Senses (Possesses senses far beyond the norms of even the best of peak humans), Longevity, Extrasensory Perception, Clairvoyance, Information Analysis, Retrocognition, Analytical Prediction and Precognition (Via Eagle Vision, could perfectly recreate and revisit past events that had already happened, could look for objects of interest, differentiate between friend-to-foe, see a person's true intentions and revisit their memories, figure out weak spots, analyze extremely dangerous areas to better understand them, Eagle Vision users are even capable of fighting against characters who have high-level precognitive powers, like in the case when one makes use of the Apple's precognitive powers in battle, and can make accurate predictions of their own in the midst of combat or during investigations with proper concentration, though in Adam's case, due to being a direct descendant and having Isu marks glowing on his body, he was able to use the Isu's precognitive powers to their full potential), Accelerated Development (As the first true Isu-Hybrid, he could easily master various forms of combat and parkour much faster than ordinary humans could, and as such, should scale above the likes of Altaïr and Desmond Miles), Master Martial Artist (As the leader of the human race, he should be skilled in all known forms of martial arts known to both man and Isu), Regeneration (Mid-Low generally, Low-Mid to possibly Low-High with the Shroud of Eden), Energy Manipulation and Projection (With several Pieces of Eden and by himself, Stealth Mastery, Weapon Mastery, Preparation, Master tactician, Master strategist, Master Survivalist, Pressure Point Strikes (Capable of knocking out enemies by hitting at their pressure points, and has used this method to torture his interrogation victims. Has innate knowledge of both the human and Isu body), Elemental Manipulation and Phasing (Via Spears of Eden and more), Durability Negation, Poison Manipulation (Via several techniques and Pieces of Eden), Magnetism Manipulation (Via Shards of Eden), Sleep Manipulation (Via several techniques and weapons), Well versed in the deadly arts of killing, Highly skilled in stealth assassination techniques, Master Acrobat, Master Freerunner, eavesdropping, interrogation, and pickpocketing, Teleportation, Invisibility, Technology Manipulation (As an Isu-Hybrid, Adam is capable of using the First Civilization's technology and artifacts without suffering from any detrimental effects and has done so multiple times), Hacking, Technopathy, Explosion Manipulation (With the Koh-i-Noor and other Isu tech), Status Effect Inducement (Via several abilities in combat and with the Apple of Eden), Can create illusions and bend minds to the user's will or even kill them, alongside a myriad of other abilities (via Pieces of Eden), Fear Manipulation (With the Apple of Eden), Madness Manipulation (via several combat tactics and Pieces of Eden, Types 1, 2 and 3), Shockwave Inducement (Via various Pieces of Eden), Statistics Amplification (Via Pieces of Eden), Limited Lightning Manipulation (with the Sword of Eden), Telekinesis (With the Staff of Eden and possibly by himself), Immortality (Types 1 and 3 with the Shroud of Eden), Statistics Amplification (Via several Pieces of Eden), Extreme Pain Tolerance, Indomitable Will, Extraordinary Genius Intellect and several more abilities and skillsets (Should possess all other abilities of the rest of the human race and their descendants, as well as that of the Isu, including several other powers from the various Pieces of Eden that have existed across time)

Attack Potency: At least Small Building level+ (Due to being one of the first Isu-Hybrids containing far higher concentrations of Isu DNA than anyone else in history, he should easily be vastly superior to the likes of Kassandra, Bayek, Edward Kenway and Altaïr Ibn-La'Ahad, and even more so than ordinary humans like Darius. Considerably superior to his descendants like Connor, Ezio Auditore da Firenze and Desmond Miles. Slaughtered hordes of Isu during the Human-Isu war. Casually smashed a windowpane with a single punch. Was the precursor of the entire human race. Can also trade blows with those capable of harming him), higher with melee weapons, firearms, Pieces of Eden and even higher with prep (Should be able to replicate anything the Isu can). Can ignore durability via several of his abilities, weapons and combat tactics.

Speed: At least Supersonic+ (Easily blitzed hordes of combat-ready Isu soldiers without issue. Even normal Isu, who were easily capable of dodging their own weapons' attacks at point-blank range and outpacing them, had immense trouble reading Adam's movements), higher with Pieces of Eden, firearms and even higher with prep

Lifting Strength: At least Class 5 (Should be considerably superior to his descendants and the strongest of humans and animals alive today. Should be on par with the Isu), higher with the Pieces of Eden

Striking Strength: At least Small Building Class+, higher with the Pieces of Eden and even higher with prep

Durability: At least Small Building level+ (Should be considerably more durable than any of his descendants), higher with the Pieces of Eden and even higher with prep

Stamina: Extremely High (Fought relentlessly for decades at an end against the Isu without any food, drink or sleep and was still completely fine), Infinite with the Pieces of Eden

Range: Extended melee range, higher with weapons. At least several kilometers with the Apple of Eden and projectiles, possibly far higher (Several Pieces of Eden are easily capable of covering entire planets on a whim, although their true potential could be even higher)

Standard Equipment: Apple of Eden and other Pieces of Eden, the Koh-i-Noor, several unknown melee weapons

Intelligence: Extraordinary Genius (Was just as smart as the Isu. Was renowned for his remarkable military knowledge and advanced use of tactics against the Isu, and he could use their own technology and had done so to give humanity a fighting chance)

Retrieved from "https://vsbattles.fandom.com/wiki/Adam_(Assassin%27s_Creed)?oldid=7009590"
Community content is available under CC-BY-SA unless otherwise noted.