VS Battles Wiki
Register
Don't have an account?
Sign In
Advertisement
in: Tier 6, Tier 6-B, Characters,
and 22 more 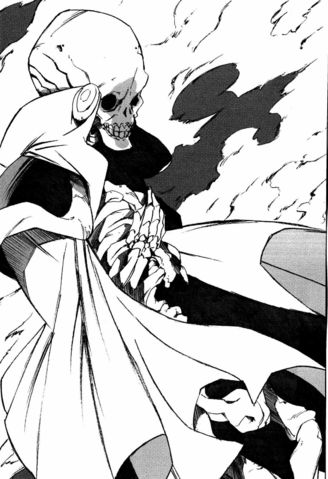 Adalman is one of the Five Fingers, and the Guardian of Demon Lord Clayman's domain, bound by a spell of the Curse Lord Kazaream. Originally a human Enlightened on the path of becoming a Saint, he was completely devoted to True God Ruminas before being betrayed by the Seven Luminary Clerics into fighting a losing battle against an undead army, becoming an undead himself in the process.

After being defeated and freed by Shuna, he defected to Jura-Tempest Federation and diverted his fanaticism towards Demon Lord Rimuru instead. He becomes one of the floor guardians of the Labyrinth.

Powers and Abilities: Superhuman Physical Characteristics, Holy Manipulation, Curse Manipulation, Magic, Automatic Translation, Enhanced Senses, Extrasensory Perception, Non-Physical Interaction (Magic is capable of harming spiritual lifeforms who have no physical body), Necromancy, Air Manipulation, Fire Manipulation, Water Manipulation, Earth Manipulation, Immortality (Type 7), Martial Arts (he is a martial artist), Existence Erasure (with Disintegration which can destroy all physical and spiritual components of the target that leaves nothing without a trace), Information Manipulation (Type 2 : With Disintegration. Disintegration attacks or Spirit Particle based attacks can destroy souls and skills. Information particle is the Fundamental aspect of Tensura and All the things such as Mind, Soul and Abstract things like Skills are made up of it.), Unholy Manipulation (Monsters are made of magicules, which can be purified or warded off by holy energy), Radiation Manipulation and Creation (Monsters of significant aura can create an aura akin to radiation, that is extremely toxic to organic life and can induce death in high concentration. It will cause monsters to be born due to the high concentration of magicules), Corruption (Type 2; Organic life that can somehow resist the toxic effects of the monster's aura can fall to its corruption and mutation effect turning them into monsters), Unconventional Resistance to Power Nullification, Power Modification, Power Absorption and Power Mimicry (Skills are inscribed into the soul which resists any outside interference unless the interference is stronger than the soul's defenses, furthermore Unique Skills and above require a strong soul to possess them), Unconventional  Resistance to Mind Manipulation (The source of consciousness, memories and mind itself is the Soul, Astral body and Spiritual Body.[1]), Resistance to Information Manipulation (Magic Senses overloads the brain with so much information it would have killed a normal human, but can be used casually) and Data Manipulation, (The information from Magic Sense is turned into data, which overloads the human brain, but can be used casually), Sense Manipulation (Comparable to Ranga, who can resist Confusion, a spell which distorts senses of smell), Fear Manipulation, Confusion Inducement, and Sleep Manipulation (Can resist Coercion), Empathic Manipulation, Corruption (Type 2; can resist the effect monster's magical aura that can turn organic life into monsters), Radiation Manipulation and Death Manipulation

Attack Potency: Country level (Adalman has enough magicules to not only rival the strength of the Beastkeeters, but also enough to rival demon lords) | Country level (After devoting his time into regaining his strength as a Wight King, he rapidly posessed power surpassing his prime, with his magicules increasing to an outrageous level comparable to Arch Demons, possibly even comparable of that of the White Primordial. Rimuru judges Adalman to be capable of defeating an unawakened Clayman)

Speed: Massively Hypersonic (Superior to Orc Disaster Geld) Speed of Light with Disintegration (Spirit particle-based attacks such as Melt Slash and Disintegration move at the speed of light)

Lifting Strength: Class 5 (Comparable to monsters like majins who can lift several tons)