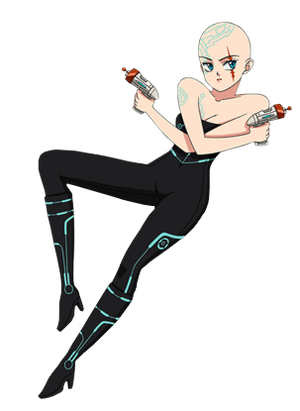 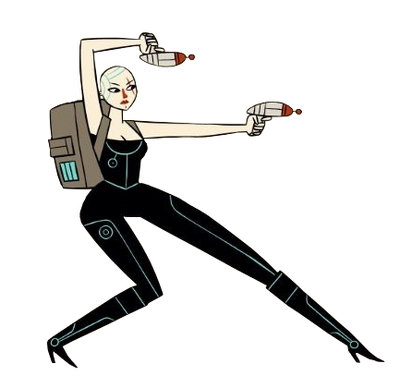 Ada Lovelace is the protagonist of the spin-off comic of Super Science Friends, 2099. She is a scientist from the future that fell in love with Z3 before he vied for control of the planet. After resolving to put an end to his tyranny, she escapes from his watch and meets up with the remaining members of the Science Friends, where she teams up with them in order to finally put an end to the world's first computer.

Powers and Abilities: Superhuman Physical Characteristics, Longevity, Cyborgization, Stealth Mastery (Evaded Z3's world-wide surveillance systems), Martial Arts, Hacking (Placed a Trojan Horse virus in Z3 that could be activated by Curie's aplha particles, causing him to self-destruct), Energy Projection with her laser guns, Time Travel/Portal Creation with her device, Acausality (Type 1. Killed a past version of herself to no ill-effect on her present self)

Attack Potency: Large Bulding level (Should be comparable to other Scientists like Tesla and Curie. Killed a past version of herself)

Speed: At least Subsonic (Can fight enemies with speed comparable to members of the Super Science Friends)

Lifting Strength: At least Class K (Should be comparable to Darwin, who could drag out the HMS Beagle)

Durability: Large Building level (Took Nikola Tesla's self-destruction head-on. Can take hits from Z3's minions, who did this to a space station)

Stamina: Above Average. Shouldn't be far behind other members of the Science Friends

Standard Equipment: A time-travelling device, a set of laser pistols

Intelligence: Genius at the very least. Considered to be one of the greatest computer scientists, and was capable to planting a virus in Z3 that he couldn't detect until it had already activated

Retrieved from "https://vsbattles.fandom.com/wiki/Ada_Lovelace_(Super_Science_Friends)?oldid=6760393"
Community content is available under CC-BY-SA unless otherwise noted.