VS Battles Wiki
Register
Don't have an account?
Sign In
Advertisement
in: Tier 9, Tier 9-A, Assassins,
and 52 more 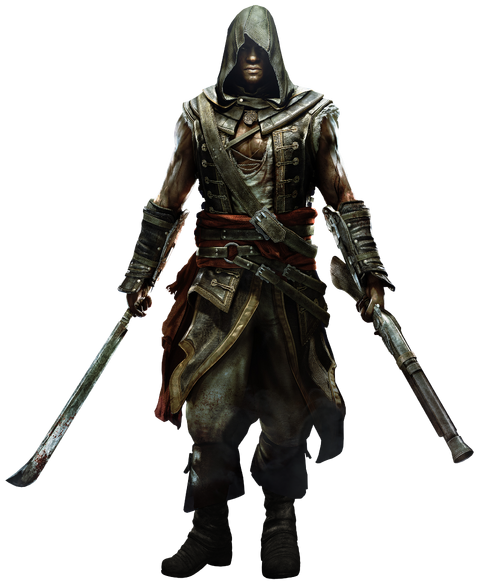 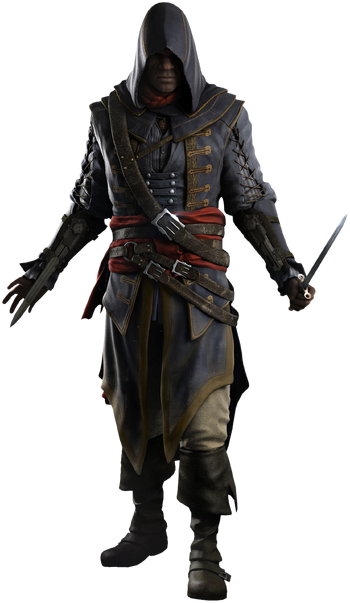 Adéwalé (1692 – 1758) was a former slave-turned-pirate from Trinidad, and later a member of the West Indies Brotherhood of Assassins. He was the father of Babatunde Josèphe, grandfather of Eseosa, and is an ancestor to Milton Jones.

During the early 18th century, Adéwalé served as Edward Kenway's quartermaster aboard the Jackdaw before eventually assuming the captaincy of his own vessel, the Victoire, and later the Experto Crede in 1735. That year, he briefly set aside his duties as an Assassin in order to aid the Maroon rebellion in Saint Domingue.

Adéwalé later aided the French in the Seven Years' War and confronted his former captain's son and Grand Master of the Templar Order, Haytham Kenway, and the Assassin-turned-Templar Shay Cormac, valiantly leading a last stand against them and ultimately falling to Shay's blade.

Tier: At least 9-A, higher with swords, Hidden Blades, machetes, guns and blunderbusses

Superhuman Physical Characteristics, Enhanced Senses, Extrasensory Perception, Clairvoyance, Information Analysis, Retrocognition and Analytical Prediction (Eagle Vision grants him a "sixth sense" or intuition that allowed him to see a person's true intentions, revisit past events, see a person's true intentions and revisit their memories, keep track of multiple enemies, see through walls, analyze locations of interest, accurately predict attacks, keep up with other precognition users and many more), Extremely talented ship captain, Regeneration (Mid-Low, could heal from stab wounds and gunshots), Master Fighter, Pressure Point Strikes (Can knock out his opponents by striking their pressure points), Weapons Expert (Sword, Blowpipe, Rope Dart, Guns, Blunderbusses, Throwing Knives, Dual Hidden Blades, Spears, Smoke Bombs, etc), Extreme Pain Tolerance and Indomitable Will (Was tortured extensively as a young child, yet he never gave up hope on escaping, and was heavily motivated by his life as an Assassin, making it his goal to ensure freedom for all), Highly skilled acrobat, skilled tactician, Technology Manipulation (As an Isu-Hybrid, Adéwalé is capable of using the First Civilization's technology and artifacts without suffering from any detrimental effects), Poison Manipulation, Sleep and Madness Manipulation (Type 1) (via blowpipe), Explosion Manipulation (via blunderbuss), Smoke Manipulation (via Smoke Bombs), Stealth Mastery

Attack Potency: At least Small Building level+ (Equal to and can perform the same feats as his captain Edward, and has fought against Edward's enemies multiple times in his life. Can trade blows with those who can harm him. With the help of Edward, he easily tore apart the bilboes he was locked in. Drew blood from Shay Cormac with his punches and was only defeated by the latter via a series of lengthy surprise attacks), higher with swords, machetes (Can easily cleave through human bodies and even send them flying upwards with a sweep attack), guns and blunderbusses (Blunderbusses used by him were essentially miniature cannons)

Speed: At least Supersonic+ (On par with Edward, and should be on par with the rest of the Isu-Hybrids in the series. Barely managed to escape a slave ship getting shelled by mortar-fire. Can easily dodge musket and flintlock pistol shots at point-blank range. Shay had a considerably hard time keeping up with him, and Haytham had difficulty lining up a proper shot against him despite both of them standing still during their confrontation)

Lifting Strength: At least Class 5 (Can easily overpower American crocodiles, which weigh over 450 kg but can pull weights several times greater than their own. Equal to Edward and can do the same feats as him. Easily pushed back and wrestled with Shay, who could physically overpower polar bears in a wrestling match and push back charging elks all by himself. Capable of tearing chains, metal locks and bilboes apart, which would require this much strength. Is unaffected by hurricane-force winds and can easily maintain near-perfect control of his ships while inside violent storms)

Durability: At least Small Building level+ (Easily swatted aside Shay's punches. Equal to Edward and has the same durability feats as him), higher with armor upgrades

Intelligence: Gifted. From his early years as a pirate Adéwalé acquired the skills required to survive aboard a ship, and was trained in terms of swordsmanship where he eventually became a capable swordsman and he was taught how to wield firearms. He possessed a high knowledge of seamanship far greater than most others which helped him gain the position of Quartermaster on-board the Jackdaw, throughout the passing years he acquired skill in captaincy and proved able to pilot various ships across the Caribbean including the Victoire and Experto Crede with exceptional ease and was capable of fending off against rogue waves and storms. Additionally, Adéwalé proved to be a capable swimmer as he was able to hold his breath for a relatively long period of time, and was capable of fending off against various hostile sea creatures during his underwater explorations. Upon joining the West Indies Brotherhood his skills increased immensely as he was personally mentored by the legendary Ah Tabai, where he was trained in the methods of stealth, combat, swordsmanship, freerunning, eavesdropping and pickpocketing. He was able to wield a variety of weaponry including Hidden Blades, swords, pistols, throwing knives, axes, muskets, smoke bombs, rope darts and a blowpipe, he proved able to Dual-wield several combinations of these weapons with excellent proficiency. Through his training he grew to become a skilled freerunner as he was able to transverse through cityscapes as well as climb natural elements including branches with relative ease, a skill which he managed to retain in his later years.

Weaknesses: Standard human weaknesses, although he has survived situations that would kill an average human