VS Battles Wiki
Register
Don't have an account?
Sign In
Advertisement
in: Tier 6, Tier High 6-C, Tier 7,
and 25 more

Acqua of The Back 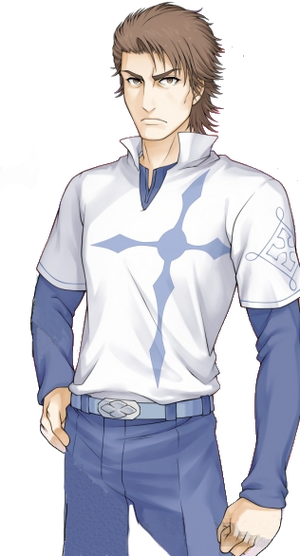 Acqua of the Back, real name William Orwell, was a member of God's Right Seat, aligned with the Archangel Gabriel and the element of water. A strong and willful man, he is a mercenary of renown in England and also a Saint of terrific power. He was sent to Academy City to eliminate the threat Kamijou Touma and his Imagine Breaker represent after both Vento of the Front and Terra of the Left were defeated, coming to blows with the Amakusa and fellow Saint Kanzaki Kaori, who were acting to protect Touma. He's an old friend of Knight Leader.

Name: William Orwell, Acqua of The Back, Flere210 (One who changes the reason of tears)

Age: Around his late 30s

Powers and Abilities: Superhuman Physical Characteristics, Enhanced Senses, Magic, Rune Magic, Healing Magic, Water Manipulation, Ice Manipulation, Air Manipulation, Earth Manipulation, Ability to negate all costs, burdens, punishments and negative side-effects from any magic spell he uses, to remove his body's natural limiters and to nullify punishment/sin based attacks; Veteran instincts bordering on precognition, master swordsman and mace user, strengthened by moonlight, Resistance to Mind Manipulation (All magicians have a defense against mind attacks, but the technique knocks them out)

Attack Potency: At least Large Island level (Casually above normal Saints and Kanzaki Kaori with Yuisen) | At least Large Island level (Even while still injured and weakened from his fight in Academy City he managed to defeat Knight Leader, who was superior to Kanzaki Kaori and fought Carissa with Curtana Original) | Mountain level (Described as still possessing a level of power comparable to a Saint, who can fight people like Hel, likely comparable to Knight Leader without Curtana's Blessing)

Weaknesses: Normal human weaknesses. Saints are weak against objects related to Jesus' crucifixion like crosses, spears, and thorns. Due to the combination of Divine's Mother Mercy and his Saint nature Acqua is significantly more affected by this weakness than a normal Saint | Same as before | Normal human weaknesses

Divine Mother's Mercy: Acqua is aligned with the Archangel Gabriel and the Virgin Mary, giving him access to this magic. This particular ability enables the user to remove any negative side-effects of any magic, including costs, burdens, and limitations. This allows Acqua to use normal magic, unlike other God's Right Seat members. It also allows him to draw power from his Saint status at a higher degree than normal Saints, who are limited by what their bodies can use without self-destructing, through the removal of his human body's natural limiters. This ability is also described as removing any and all sin from the user, thus practically having its user become a sinless human. Due to his, the user gains immunity to punishment based attacks, as the ability can be used to expiate the user's sins so that they can't be punished for them.

Rune Magic/Water Manipulation: Acqua is knowledgeable in the use of rune magic, specializing in the manipulation of water and ice in various forms through the rune Laguz (Water, Lake). Acqua, due to his alignment with Gabriel, is a powerful water magician.

Moon Spell: Acqua's strongest mace attack. First, he jumps up to 40 meters in the air. Then he uses the moon or something that represents the moon (For example, an image of the moon on a giant screen was shown to work) to draw power from his connection to Gabriel. The power makes his mace glow a bluish white before Acqua shoots down towards his opponent like a falling meteor. Although the first time he used this attack it was muffled by Kanzaki Kaori, it had enough strength left to collapse a 100 meters circular section of Academy City's District 22's fourth level into the next underground level 20 meters below and severely damaged Kanzaki, even if Acqua had only jumped 20 meters. Acqua uses the following chant for this spell: "The Divine Mother shall remove all evil. In depicting this power called the Truth of God, let your mercy rise to the heavens!!”

Mace: Originally Acqua used a giant 5m long mace that looked similar to a knight's lance. He could summon the mace from his own shadow using magic.

Ascalon: Also known as the Great Sword Ascalon, it's a giant sword given to Acqua before the British Civil War. It was created at the end of the 16th century by an artist who based it on the sword used by St. George. The sword was created around the idea of working out what exactly would be needed to slay the 50m dragon from the legend if it had actually existed. The result was a giant sword 3.5m long and weighing 200 kg. The sword possesses various traits which are designed to allow it to be used in different ways, meant to cut through the different parts of the dragon. Magical power is supplied to the section of Ascalon which is to be used and the shine of the blade changes color depending on which function is being used.

The sword also has two hidden weapons. First, the handle can be removed from the giant sword, revealing a hidden sword over a meter long which can be shot out from the handle and swung around by an extremely small metal wire. The blade can be connected to the handle again by rolling up the wire. Second, the handle can burst out something similar to tree sap that hardens in contact with the air, creating a spiked club similar to Acqua's original mace.

Healing Magic: Acqua is knowledgeable enough in healing magic to be able to patch up the injuries he received fighting the Knight Leader.

Mercenary Abilities: Acqua has many years of knowledge in the field of battle from his mercenary career experience, so he can perform maneuvers like blocking a physical attack without seeing it or judging the distance and direction of an attack only by wind pressure.