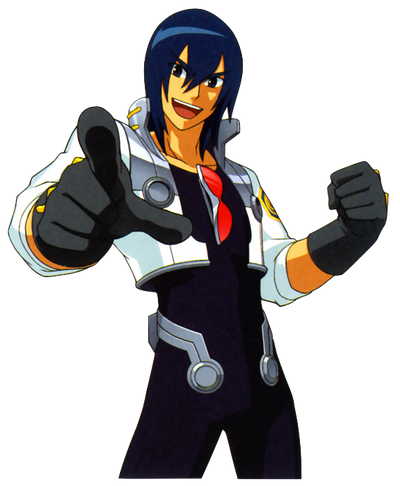 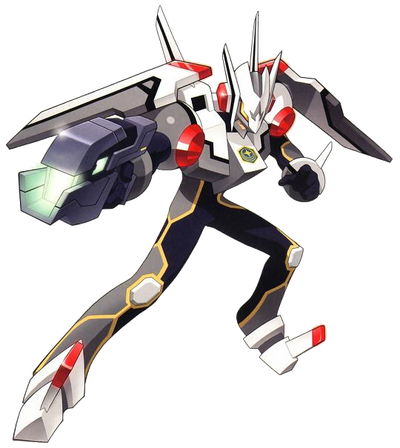 A.C. Eos, better known as Ace is a leading Satella Commando and the first registered user of Project: Transcode. Despite his imposing rank and incredible combat ability, Ace is an easy-going and friendly person that is even child-like at times. He's practically addicted to the "Mega Snack" candy bar series and is frequently seen chomping on them even in the midst of conversations. Regardless, he is a reliable and trustworthy commander who leads the crusade against Dealer and quickly becomes one of Geo's closest associates, assisting him in combat as Acid Ace, the first successful EM Wave Human created with an artificial Wizard.

Attack Potency: Solar System level (On par with Geo in combat) | At least Solar System level (Geo claimed that even he wouldn't be able to defeat a Finalized Acid Ace overloaded with Noise, but this statement was made before Geo's first canon Finalization)

Speed: Massively FTL+ (Comparable to Geo, who can travel from Earth to Sagittarius A* in minutes, which is about 2.6 billion times the speed of light at the minimum), possibly higher for short bursts (Wing Verniers propel him at higher speeds than normal) | Massively FTL+

Durability: Solar System level (Took hits from a reluctant Geo and was later restored with personality intact after he was blasted into individual EM Waves during his clash with Dread Joker), Intangibility makes him hard to kill | At least Solar System level (Geo claimed that even he wouldn't be able to defeat a Finalized Acid Ace overloaded with Noise, but this statement was made before Geo's first canon Finalization)

Stamina: Very high, the artificial nature of the EM Wave Change means that it takes a great toll on Ace's health to maintain it for long periods.

Intelligence: Ace is an extremely experienced Satella Commando who despite his easy-going nature is an absolute expert at deleting viruses and other targets, deleting twelve waves of viruses in seconds each with barely any effort on his part. He is calm and cool-headed under pressure and is able to easily match Geo in combat when he gets serious despite the latter's greater experience as an EM Wave Being.

Weaknesses: His combat time is extremely limited due to the artificial nature of the EM Wave Change, forcing him to change back after a certain period of time lest his health be seriously affected. Extremely dense EM Radiation can cause him to go berserk if he doesn't prepared for it but it can also empower him by allowing him to enter his finalized form.

Retrieved from "https://vsbattles.fandom.com/wiki/Acid_Ace?oldid=4105804"
Community content is available under CC-BY-SA unless otherwise noted.