VS Battles Wiki
Register
Don't have an account?
Sign In
Advertisement
in: Tier 9, Tier 9-B, Illiad,
and 27 more 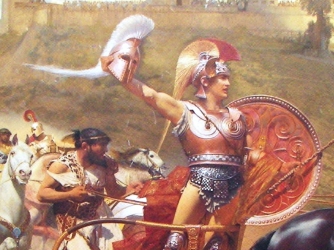 Achilles is a Greek hero of the Trojan War and the protagonist of the Illiad. He is the son of Thetis and Peleus.

Powers and Abilities: Superhuman Physical Characteristics, Weapon Mastery, Sound Manipulation (He let out three war cries that killed 12 Trojan soldiers), Healing via spear and medical knowledge (Can remedy diseases with medical herbs), Resistance to Heat Manipulation (As a baby, was unaffected by the cold and being in a fire), Sleep Manipulation (Can induce sleep with medical herbs), Stealth Mastery (Walked across a frozen stream without breaking the ice. Stole from some centaurs right in front of them without being caught), Invulnerability (Was stated to be completely invulnerable except for his left heel)

Attack Potency: At least Wall level (Killed a lionesss and her cubs and carried the carcasses from the cliffs of Pholoe to Chiron's cave. Split a man's head in two. No one in the Trojan army could best Achilles in direct combat. Pushed the entire Trojan army, including Hector, back to the walls of Troy. Killed 10 Trojan soldiers in a fit of fury, one of which he cut his head off and it sailed off into an arc. Threw a spear through a bronze helmet and into a Trojan warrior's head.), possibly higher (Would have broke down the gates of Troy if Apollo hadn't intervened)

Speed: At least Superhuman (Outran horses, dogs, a centaur, and darts when he was 12. Chased after Apollo with the speed of a racehorse), possibly Subsonic (Jumps the distance of a spear-throw with the speed of an eagle. Golden Eagles can reach speeds of 200 mph)

Lifting Strength: At least Class 1 (His spear was so heavy that no one in his army could lift it. Could physically overpower lions, who are this strong. Pulled his spear from the ground which Asteropaeus, an incredibly strong quarter-god warrior, couldn't do it with three tries. Lifts a wooden bar that takes three men to lift.), likely higher (Pulls a tree branch, which uproots the tree, to block a river)

Durability: At least Wall level (Resisted a wave of water that could uproot a tree. Asteropiaos, who is the grandson of a river god, was only able to scratch Achilles on his elbow, something even Hector couldn't do), possibly higher (Was dipped into the river Styx as a baby. His skin is impenetrable to steel. Said to be invulnerable on all parts of his body except his left foot. His shield is described as being impenetrable. Deflected boulders with his shield. Takes the force of two river gods and keeps on going.)

Stamina: Very High (Ran around the city of Troy three times chasing after Hector. Troy has a circumference of 7500 paces or 5715 meters. Able to slaughter Trojan warriors while wading through a moving river.)

Intelligence: A highly trained warrior with decades of experience and a skilled healer. Considered intelligent and articulate by his peers. Was trained with darts, javelins, swords, spears, bows, and pikes when he was a kid.

Weaknesses: He was as durable as a normal man on his left heel (An arrow pierced him there and he died after a while from his wound). In addition, nothing indicates that he knew about the vulnerability of his heel. He was also rather immature as he had traits of being moody, contemplative, petty, wrathful, and arrogant along with being a bit asocial. His pride caused him to seclude to his tent and not participate for a time in the war because Agamemnon insulted him.