VS Battles Wiki
Register
Don't have an account?
Sign In
Advertisement
in: Tier 6, Tier High 6-A, Characters,
and 68 more 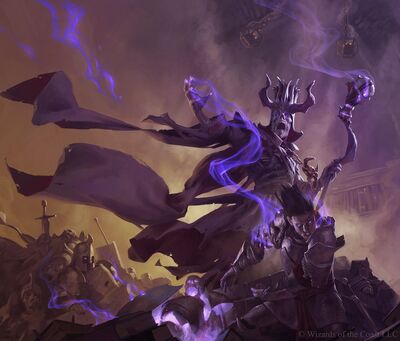 Acererak is an extremely powerful Lich- one so strong he could ascend to godhood, but chooses to refrain, instead delighting in the torment and suffering of luring adventurers with great treasure and subsequently destroying them with his traps. Previously he traveled the multiverse in search of highly potent artifacts, hiding them away- and the locations of some of these artifacts (including his phylactery) are some of the most sought after secrets in the multiverse.

Acererak is the lich responsible for the creation of the Death Curse after bringing an Atropal from the Plane of Negative Energy into this reality, and additionally is attributed with the slaying of the Nine Trickster Gods of Chult- powerful spirits, now bound to his tomb.

Acererak was born into the world a cambion - child hybrid of a demon and a human. After the slaughter of his mother, Acererak was saved by Vecna, and becomes the god's apprentice. Following Vecna's betrayal at the hands of Kas, Acererak builds a tomb for himself and devotes himself to Lichdom, eventually abandoning mortal physical form. He has made deals more recently with the succubi Malcanthet, gaining a mirror that captures souls.

Acererak's tomb is ranked as the third most iconic adventure in Dungeons and Dragons publication history by Dungeon magazine, and consistently scores in the top ten on all other lists.

Powers and Abilities: Superhuman Physical Characteristics, Abstract Existence (As outsiders, Demons are purely abstract in their physiology, only maintaining an illusion of fleshy existence), Chaos Manipulation/Law Manipulation (Demons play into the multiversal balance of Chaos and Law; they are formed from Chaos and their mere presence raises levels of ambient chaos, thus causing chaotic effects to take place. With enough of an upset balance, entire planes of existence can be sent careening into the Abyss), BFR (Anything a demon eats is sent to the Abyss), Fear Manipulation, Memory Manipulation (The insides of demons generate "blood", a black viscous material that, when it comes into contact with an enemy, induces supernatural fear and short term memory loss), Corruption (Types 1 and 2), Soul Manipulation (Demonic interaction rends the soul and corrupts the flesh, Acererak can absorb souls to fuel him), Immortality (Types 1, 2, 3, 4. 7 and 8; Outsiders, when slain outside of their home plane, will drop their essence back into their own plane of existence to be reborn, typically a century later for lesser Outsiders and potentially instantly otherwise), Blood Manipulation (Blood spontaneously appears in the presence of demons, oozing from walls and filling structures), Spatial Manipulation (Mazes conjure spontaneously in the presence of Demons, buildings can possess larger insides than outsiders permit), Weather Manipulation (Weather is affected by the Chaotic upset of a demon's presence, causing effects such as blizzards in the middle of summer or earthquakes away from fault lines), Power Modification (Demons cause magical powers to become slightly modified in their presence, giving them a sickly, corrupted look), Death Manipulation (Plants and animals die for inexplicable reasons when in the same biome as a demon), Disease Manipulation (Creatures of good or lawful alignments may become sickened or ill at ease when in a Demon's presence), Animal Manipulation, Biological Manipulation (A demon can warp the creatures in the area into dire forms of itself, becoming stronger and meaner), Possession (Demons of even lower stature can possess enemies to take control of them), Incorporeality (Demons become insubstantial wisps whilst attempting to possess enemies, being unable to be touched even by other spiritual creatures), Astral Projection (Demons can project freely onto the Astral Plane), Mind Manipulation (Demons possessing a foe can take over their minds, Acererak can manually control the minds of many targets), Sense Manipulation (Aside from the target's mind, a demon can hijack a target's senses), Transformation (Possessed creatures can have their physiologies altered into those of demons over a course of days), Curse Manipulation and Statistics Reduction (Demons who take the role of a Corrupter Demon can, upon possessing a target or object, bestow curses with a touch, inducing severely reduced stats and capabilities), Power Bestowal (An Enhancer demon can bestow abilities upon an object it possesses, making it far stronger with various magical effects), Telepathy (All demon types maintain telepathy), Large Size (Type 0), Non-Physical Interaction (Magic in D&D can interact with conceptual demons, abstract devils, intangible elementals, and incorporeal ghosts; potent enough magic can even affect fully nonexistent beings such as Shar), Incorporeality (Was born a cambion of a Balor and a human- demons are born from the concepts of sins; at some point ascended to the position of Demilich, a lich that has abandoned all physical forms), Magic, Reality Warping, Self-Sustenance (Types 1, 2, and 3, as an Undead Demilich, he requires no typical needs of survival and effectively has infinite stamina), Truesight, Matter Manipulation (Can instantly disintegrate enemies, leaving behind only a fine dust), Existence Erasure, Absorption, Probability Manipulation via Legendary Resistances, Regeneration (Low-Godly, all liches can reform from their soul, stored away in a phylactery), Telekinesis, Ice Manipulation, Electricity Manipulation, Forcefield Creation, Lock Manipulation, Necromancy, Magic Nullification, Illusion Creation, Smoke Manipulation, Body Puppetry, Energy Manipulation, Energy Projection, Dimensional Travel, Regeneration Negation (Mid-Godly, can prevent souls from becoming repaired after the total destruction of the being by feeding them to himself or to his Atropal), Teleportation, Time Manipulation, Paralysis Inducement, Life Manipulation, Statistics Amplification, Explosion Manipulation, Sealing, Gravity Manipulation, Heat Manipulation, likely many others, Extreme Resistance to Ice Manipulation, Electricity Manipulation, Death Manipulation, Poison Manipulation, Any non-magical damage (magic being Reality Warping and mundane, general, "magic"), Mind Manipulation, Perception Manipulation, Deafening, Fear Manipulation, Petrification, Transmutation, Paralysis Inducement, Necromancy, Possession, Sleep Manipulation, Disease Manipulation, Statistics Reduction, Energy Manipulation, Magic, Holy Manipulation, and Reality Warping

Attack Potency: At least Multi-Continent level (Stronger than the Atropal that acts as his ward, and thus should be laughably superior to the Phaethon abomination capable of heating the cores of worlds), likely far higher (Stated at multiple times to be capable of ascending to godhood, not dissimilar to his master, Vecna)

Lifting Strength: Class 5 (Should be able to push 2.72 metric tons)

Durability: At least Multi-Continent level (Superior durability to the Atropal in his keep)

Stamina: Infinite, undead and constructs have no need for rest in any way, shape, or form.

Range: Kilometers with most magic, up to inter-dimensional

Standard Equipment: Sphere of Annihilation, Staff of the Forgotten One, Demilich Construct, The Soulmonger, Talisman of the Sphere, likely many others

Intelligence: At least Extraordinary Genius (Maintains an intelligence score of 27, making him superior to the Illithid Hivemind Elder Brains, which contain all of the knowledge of their already hyper-advanced species, including space faring technology and other Spelljammer tech; was taught magic directly by Vecna himself, who is one of the rare beings in the Multiverse more intelligent than Gond)

Weaknesses: Underestimates the resolve of his enemies 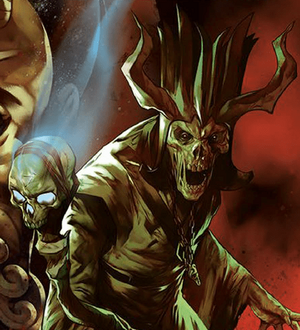 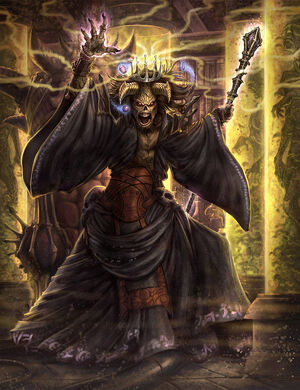 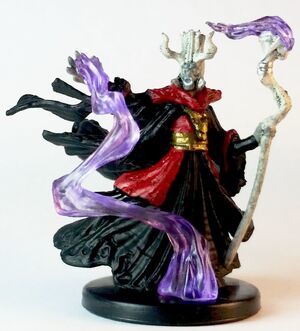 A D&D figure piece of Acererak 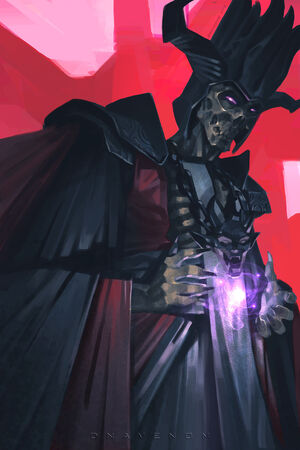 Fanart of Acererak, credit to Penar Petev of Artstation