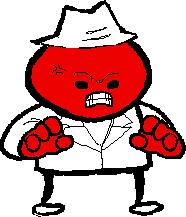 Ace Dick is Problem Sleuth's arch-nemesis, a rival detective with the world's worst imagination and a voluminous gut. After Problem Sleuth rescues him from the confinement of his own office, they join forces to take down the nefarious Mobster Kingpin.

Speed: Unknown, FTL reactions (Should be comparable to Problem Sleuth).

Intelligence: Very low, well below average. Ace Dick has virtually no imagination and his strategies are simple and brutally violent.

Weaknesses: Ace Dick is incredibly stupid and has virtually no imagination. He constantly uses his abilities in ways that backfire on him, and Zombie Ace Dick will eventually just rot away.

Retrieved from "https://vsbattles.fandom.com/wiki/Ace_Dick?oldid=6307604"
Community content is available under CC-BY-SA unless otherwise noted.