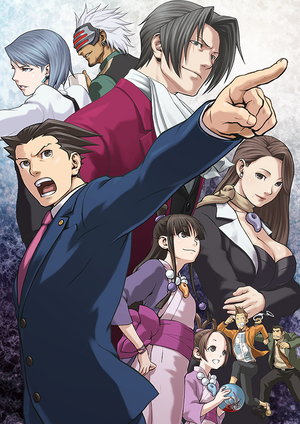 For detailed information about this series, visit the Ace Attorney Wiki.

Phoenix Wright: Ace Attorney, known in Japan as Gyakuten Saiban (逆転裁判?, lit. "Turnabout Trial"), is a visual novel adventure video game developed by Capcom. It was originally released for the Game Boy Advance in 2001 in Japan, and has since been ported to multiple platforms. The Nintendo DS version, titled Gyakuten Saiban Yomigaeru Gyakuten in Japan, was released in 2005 in Japan and North America, and in 2006 in Europe, and includes an English language option. The game is the first entry in the Ace Attorney series, and has received several sequels and spin-offs.

Most of the characters of the franchise display superhuman feats ranging from Phoenix Wright breaking a reinforced door to Simon Blackquill dismantling a robot when wielding a katana, for speed most characters are at Supersonic levels of speed, like Nahyuta Sahdmadhi, who blitzed a revolutionary insurgent, Phoenix, who reacted and dodged a whip multiple times, and Datz, who reacted to missile fire from a drone.

Crossovers and cameos are considered non-canon.