VS Battles Wiki
Register
Don't have an account?
Sign In
in: Characters, Dinosaurs, Dinosaur King,
and 20 more 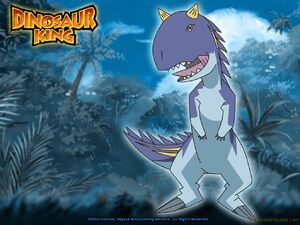 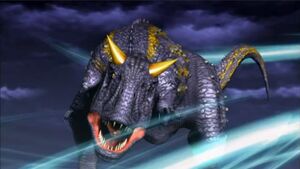 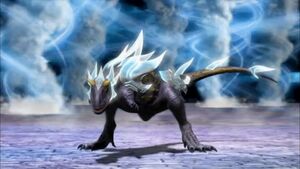 Another of the D-Team's main dinosaurs, who has chosen Rex as his partner.

As a Carnotaurus, Ace is an immensely powerful dinosaur of the Wind attribute, and harbors an intense rivalry with Tank

Attack Potency: Wall level (Should be equal to Chibi Chomp) | Multiverse level (Element Stones used to evolve the Chibi forms of the Dinosaurs into their True Forms rivals that of The Cosmos Stones, which have the ability to contain whole universes within them and together can cause the destruction of all reality, of which there are timelines per every moment in time. The True Form Dinosaurs have to at least be somewhat comparable with the Element Stones as they use their energy to fight and achive their form to evolve. ) | Multiverse level (Comparable and shown at times to be even superior to the Spectral Pirates, who were shown to be superior to one Cosmos Stone. Can affect realms outside the Multiverse as a result of clashing) | Unknown, possibly Multiverse level (Can be comparable to the Cosmos Stones)

Speed: Average Human (Can keep up with his human owners) | At least Supersonic (One of the fastest entities in the series. Can move so quickly that he becomes invisible to other dinosaurs like Terry) | Immobile

Lifting Strength: Likely Class 100 (Can easily hoist and throw around other dinosaurs)

Intelligence: High for an animal (More intelligent than an average mammal, and can even understand and process simple sentences) | Average, Gifted in combat (Dinosaurs are sentient, possessing intelligence comparable to humans, and are naturally highly skilled in combat. They have spent their entire lives battling for dominance and survival, and utilize combat styles that take advantage of their physiology in the same vein as human martial arts)

Weaknesses: Revived dinosaurs can't switch between forms without the assistance of their partner. His wind attacks are less effective against fire-based opponents. Has a crippling phobia of water. 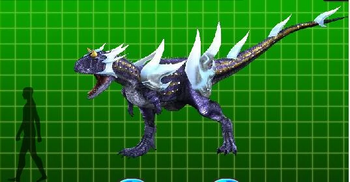