VS Battles Wiki
Register
Don't have an account?
Sign In
Advertisement
in: Characters, DC Animated Universe, Female Characters,
and 15 more 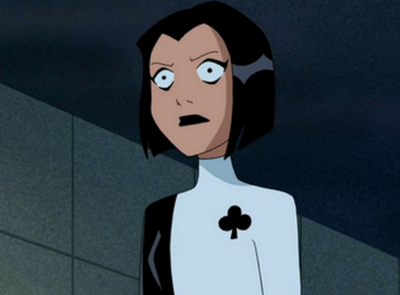 Ace was one of five children that were kidnapped from their homes and placed in a government-funded facility where they were trained to use their powers for the purpose of being used as weapons. During their late teens, the Joker freed the children and formed them into the Royal Flush Gang team, using four of its team members as interference to prevent the Justice League from defusing all the bombs he had set up in Las Vegas, while using Ace to manipulate the minds of those watching the Justice League in action on television.

Age: Is a teenager

Powers and Abilities: Telepathy, Perception Manipulation (Can manipulate people's minds and alter their perceptions simply just by staring at them whether directly or through any form of visual technology), Illusion Creation, Mind Manipulation and Madness Manipulation (Type 2, can warp the perception of others to the point she can leave them mentally instable, catatonic or psychologically damaged) | All the previous abilities to a much greater extent plus Telekinesis, Power Bestowal ("Created" her own Royal Flush Gang by offering some of her powers to its new members), Reality Warping (Near the point of her death, Ace's powers evolved to the point she became able to mentally alter reality to a massive scale)

Attack Potency: Human level physically | City level, possibly higher (By the time Ace developped her reality-altering abilities, she became so powerful that she would have destroyed an entire city at the moment of her death, and could even have caused even bigger damages up to an unknown but much greater extent)

Range: Varies, up to kilometers, potentially higher at full power

Weaknesses: Normal human weaknesses apart from her powers. The headband created by the Governement can make her harmless and controllable. Over time, Ace's powers became to powerful to handle for her brain, causing her to slowly die from an aneurysm.