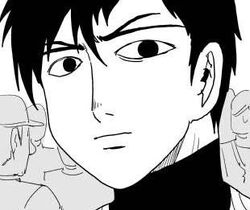 Accel is the leader and founder of "The Hunters," a group of vigilantes that formed since an unknown amount of time (it's implied that they have been around before the Hero Hunter arc).

Contrary to the usual hatred, disgust and social ostricization unregistered heroes get from the public and the Hero Association, Accel's extraordinary power and efficiency in taking down serious threats has gained him major admiration. With the Hero Association even offering him an immediate S-Class position since they wanted him to join them so badly.

The Hero Association's love for Accel is far from mutual however. Accel feels that the HA is a corrupt, incompetent organization that cares more about wealth and vanity than the lives of those they claim to protect.

As such, he chose to join a mysterious organization that is planning to replace the current one. The same one that has attempted to recruit Raiden and Genos.

Attack Potency: Unknown (Along with his men managed to exterminate a Demon level threat. His power is considered to be on par with most S-Class heroes)

Speed: Unknown (Kept pace with an unspecified Demon level. Stated to have speed comparable to an S-Class)

Durability: Unknown (Considerably tougher than his subordinates, some of which were able to survive beatings from Demon levels)

Intelligence: Shown to be highly proficient in combat along with possessing great leadership and persuasion skills.

Retrieved from "https://vsbattles.fandom.com/wiki/Accel?oldid=6945581"
Community content is available under CC-BY-SA unless otherwise noted.