VS Battles Wiki
Register
Don't have an account?
Sign In
Advertisement
in: Tier 6, Tier High 6-C, Tier 2,
and 10 more 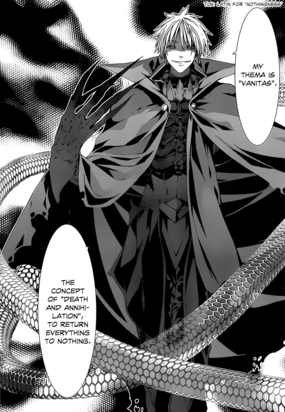 Powers and Abilities: Vanitas- Abyss' primary Thema centers around all-consuming darkness and can return all of creation to nothing, including all seven Archives and the foundations of Magic itself. So far, Abyss has shown the ability to use this in the form of bindings, which very likely would've destroyed Akio if she hadn't been saved, and in the form of darkness itself, which consumes and destroys everything in its path. He notes that this magic can give one a taste of true Nihility, which reflects the concept of erasing others. Energy Manipulation, Gravity Manipulation, Reality Manipulation

Attack Potency: Large Island level (Via this calc), Universe level+ (Demon lords and the candidates for becoming demon lords can reconstruct a world, with that demon lord creating a world) as demon lord

Speed: FTL+ (Managed to keep up with light goddess Lugh)

Durability: Universe level+ (Managed to take blows from Arata), Multiverse level+ as demon lord (Tanked Deus Trinity Dante Cross, who has the capability to destroy all worlds in Trinity Seven, which has an infinite number of universes)

Intelligence: Unknown (He knows everything about the worlds he creates and others before and after)

Note: Has a multitude of hax abilities, and some that haven't been shown yet, in addition to changing his powers.