VS Battles Wiki
Register
Don't have an account?
Sign In
Advertisement
in: Tier 7, Tier 7-B, Characters,
and 16 more 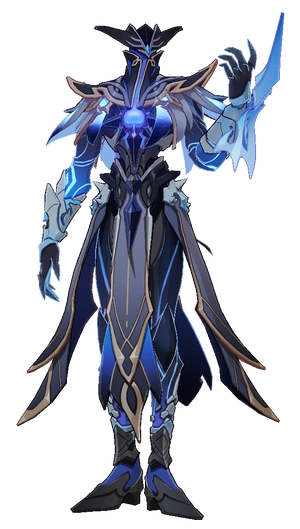 Abyss Heralds are elite members of the Abyss Order, which are remnants of the lost civilization of Khaenri'ah. They lead lesser Abyss monsters such as Abyss Mages and Hilichurls in their operations, and are far more powerful than the likes of Ruin Guards, being capable of contending with exceptional Vision-wielders.

Abyss Heralds come in elemental variations, but as of current, only its Hydro variant "Wicked Torrents" is known.

Powers and Abilities: Superhuman Physical Characteristics, Master Martial Artist and Swordsman, Abyssal Magic, Portal Creation (Heralds are able to create warp portals to any location), Summoning (Heralds can summon lesser abyssal monsters such as Abyss Mages and Hilichurls to their side), Water Manipulation, Weapon Creation (Heralds are able to form weapons out of their respective elements, usually in the form of bladed gauntlets), Forcefield Creation (Heralds can create standard elemental shields as well as enhanced ones such as the shield generated by Dark Descent), Disease Manipulation and Empathic Manipulation (Prolonged exposure to the Smaragdus Jadeite, which contain concentrated elemental energy, can cause effects which vary from illnesses at best to changes in personality at worst[1]), Statistics Reduction (the warped waters used by a Hydro Abyss Herald are capable of inflicting the Slowing Waters debuff, which decreases the speed of those they strike), Resistance to Water Manipulation, Disease Manipulation and Empathic Manipulation (Visions and Elemental users can resist the effects of Smaragdus Jadeite[1]).

Attack Potency: City level (Abyss Heralds are able to contend with characters on the level of the Liyue Traveler and Lupus Boreas in single-combat).

Speed: Massively Hypersonic reaction and combat speed (Able to dodge natural lightning as well as react to characters and attacks capable of moving at similar, if not greater speeds).

Lifting Strength: At least Peak Human (Able to hold ground against blows from the Traveler).

Striking Strength: City Class (Capable of harming characters on the level of the Liyue Traveler with physical strikes).

Durability: City level (can tank blows from characters on the level of the Liyue Traveler).

Stamina: At least Very High. Able to hold their own in prolonged fights against both the Liyue Traveler as well as Dainsleif at the same time.

Intelligence: At least Gifted. Capable of contending with the Traveler and Lupus Boreas in single-combat.

Weaknesses: The shield generated by Dark Descent naturally imbues the Herald with Hydro, causing it to become highly-susceptible to being frozen.