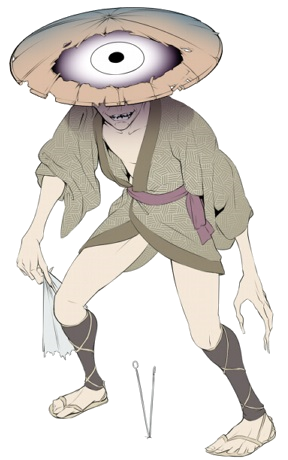 The Aburatori is a relatively recent Youkai from the Tohoku region. However, its traits make it dangerous enough to overwhelm even other deadly Youkai. The Aburatori is a Youkai that disguises itself as a farmer and slips in with the other villagers working on the farms. The next thing they know, it’s already made its way in, kidnapped a child, removed their organs, pierced them with a skewer, and roasted the child over a fire. Its goal is supposed to be the oil from the child’s organs. It’s a Youkai without the lessons present in most Japanese ghost stories. It simply appears, simply abducts and simply kills.

The Aburatori first appears in a flashback told from Yukari's point of view, detailing her efforts to save Shinobu from a Package made using his traits. He would later reappear in the present desiring to obtain Yukari's ability to manipulate destiny, and once more when Shinobu traveled to the past to try and solve the original incident with Yukari and the Aburatori that had forced her to sacrifice her powers.

Powers and Abilities: Superhuman Physical Characteristics, Can produce an endless amount of skewers, Weapon Mastery (Expert at throwing skewers as a weapon), Spatial Manipulation, Teleportation, Killing intent projection, Immortality (Type 1), Resistance (Immunity to conventional weapons and damage inflicted by the normal laws of physics, some resistance to interference from history and destiny) | Time Travel and Time Manipulation (Can distort a timeline to rewrite it as he pleases by successive time travelling to the same point over and over), Absorption and Power Absorption via the aforementioned timeline distortion, Duplication (Can create a copy of himself in another point of the timeline), Acausality (Type 1) | Destiny Manipulation

Attack Potency: At least Wall level (Tore a van in half with a kick, his powers affected the Aoandon, should be much stronger than Yukari)

Speed: Likely Subsonic (Can move much faster than humans and normal Youkai, can easily catch up to a moving vehicle), instant with teleportation

Durability: Wall level, immune to conventional weapons and damage inflicted by the normal laws of physics

Retrieved from "https://vsbattles.fandom.com/wiki/Aburatori?oldid=4248169"
Community content is available under CC-BY-SA unless otherwise noted.