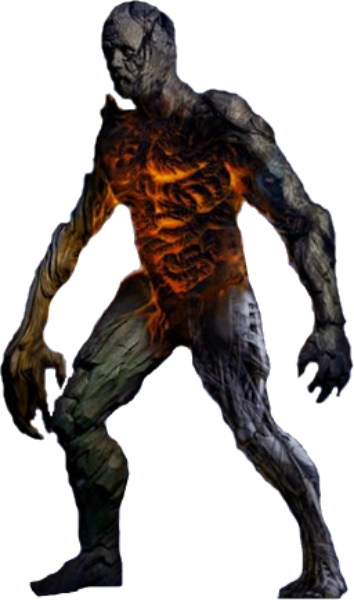 David Banner was a genetics researcher who, in his quest to improve on humanity, experimented on himself. After his wife, Edith Banner gave birth to Bruce, David saw that his experiments on himself had affected Bruce. Trying to find a cure for Bruce's condition, David had his research shut down by Ross. Furious, David accidentally destroyed his laboratory and tried to kill Bruce only to accidentally fatally stab Edith, before being arrested and confined to a mental institution; blocking his memories of David killing Edith, which haunt his nightmares, Bruce was taken into foster care.

3 years later, he was released from mental hospital, and saw Bruce become the Hulk. He experienced Bruce's blood, and became obsessed with gaining his son's power. David subjected himself to the devices that gave Bruce his power, and became the Absorbing Man, giving himself the ability to absorb the properties of everything he touched.

David transforms into a being of pure electricity, and fights with the Hulk. He is thrown into Pear Lake. In water, he tries to absorb Hulk's power, only to be overwhelmed by Hulk's energy, and was ultimately blown apart by a Gamma Charge by the military.

Speed: At least Supersonic combat speed (At least comparable to the Hulk, speed-blitzed him into the clouds). Massively Hypersonic+ attack speed with electricity

Intelligence: Normally a Genius Geneticist. Below Average as the Absorbing Man.

Weaknesses: Limit on how much gamma power he can absorb before swelling up in it.

Retrieved from "https://vsbattles.fandom.com/wiki/Absorbing_Man_(2003_Movie_Version)?oldid=5944485"
Community content is available under CC-BY-SA unless otherwise noted.